YEREVAN — Armenia’s Foreign Ministry spokeswoman Anna Naghdalyan responded to a statement by Russian Foreign Minister Sergey Lavrov that some statements on the Nagorno-Karabakh conflict, in particular, “Artsakh is Armenia. End of story,” “do not contribute to the formation of an atmosphere for restoring the political process.”

Naghdalyan dismissed the criticism on Thursday. “We find it important that each of the mediators avoids selective or one-sided evaluations,” said the ministry spokeswoman.. She argued that PM Pashinyan reaffirmed Armenia’s readiness for a compromise peace deal with Azerbaijan when he addressed the UN General Assembly in New York late last month. “Artsakh [Karabakh] is Armenia. Period,” Pashinyan declared at a rally held in Stepanakert on August 5.

“Armenia has been and remains a supporter of the format of the OSCE Minsk Group co-chairs, whose impartial mediation is key to  finding a peaceful settlement of the conflict and maintaining the unity of the co-chairing countries. At the same time, it is important that each mediator avoid making selective and unilateral assessments,” Naghdalyan said.

“In this regard, we consider unacceptable the inability of Azerbaijan to speak out publicly on a peaceful settlement of the conflict that would be acceptable to the peoples of Armenia, Artsakh and Azerbaijan. Azerbaijan’s allegations that the issue should be resolved “exclusively within the framework of the territorial integrity of Azerbaijan” do not contribute to the creation of an appropriate atmosphere to advance the peace process,” Naghdalyan said.

Lavrov criticized Prime Minister Nikol Pashinyan for describing Nagorno-Karabakh as an integral part of Armenia, saying that such statements hamper efforts to end the Karabakh conflict.

Lavrov commented on the conflict when he spoke during an annual international forum held in the southern Russian city of Sochi on Wednesday.

“As regards the situation on the ground, it is much calmer now than it was one year ago,” he said. “But the political process is on hold and we have not yet managed to kick-start it.”

“The parties are making quite serious statements,” he went on. “In particular, there has been a statement to the effect that Karabakh is Armenia, just like Albanian Prime Minister [Edi] Rama said from Tirana than Kosovo is Albania. This certainly does not help to create an atmosphere conducive to the resumption of the political [settlement] process.”

Lavrov added that the Russian, U.S. and French mediators co-chairing the OSCE Minsk Group will continue press for the conflict’s resolution. “This is one of the few situations where we have the same vision,” he said. 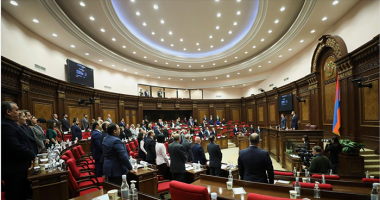