STEPANAKERT — The Staff of the Human Rights Ombudsman of Artsakh published a report on vandalism against the Armenian cultural heritage in the occupied territories of the Republic of Artsakh and the threat of destruction of Armenian monuments.

There are an estimated 4,000 Armenian cultural sites, including 370 churches, 119 fortresses and other historical and cultural monuments in the Artsakh (Nagorno-Karabakh) Republic. The churches date from the 4th to the 21st century. Its valuable archaeological sites, most notably the ancient city of Tigranakert of Artsakh, date back to the 1st c. BC – 13th c. AD period. 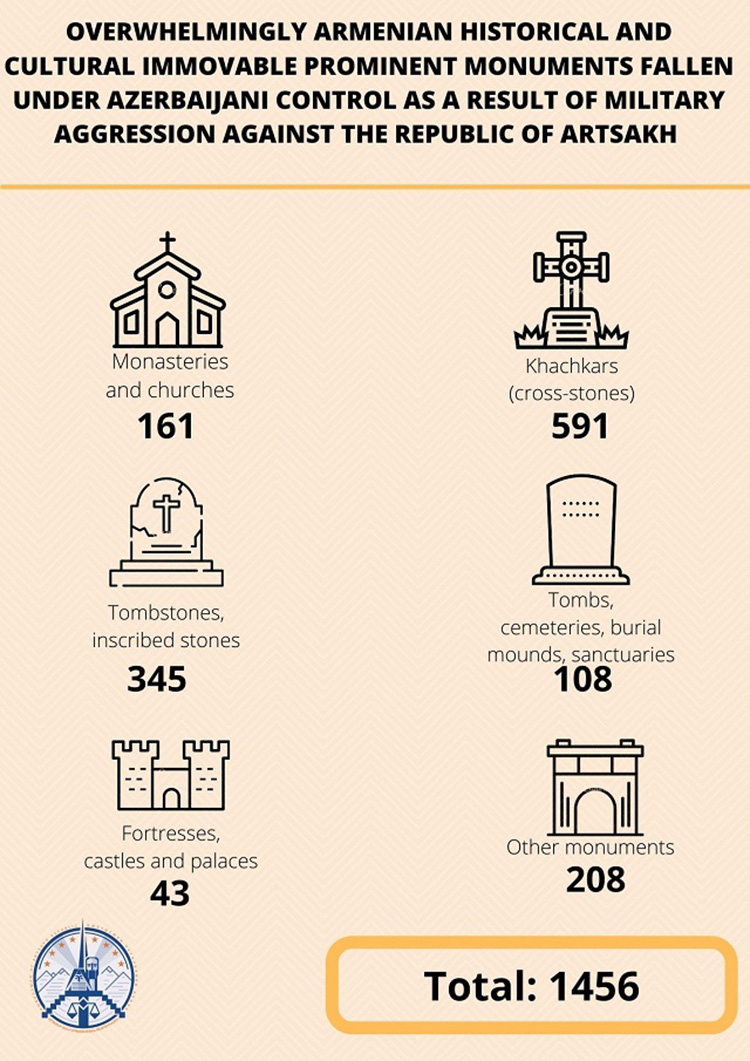 Under the trilateral statement on ceasefire of November 9, 2020 between the Republic of Armenia, the Republic of Azerbaijan and the Russian Federation, at least 1,456 overwhelmingly Armenian historical and cultural immovable prominent monuments have been fallen under Azerbaijani control, including 161 Armenian churches, the archaeological sites of Tigranakert, Azokh Paleolithic cave, the Nor Karmiravan tombs, Mirik, Keren, and architectural monuments such as palaces, bridges, and historic quarters (see Annex 2). In addition, in the territories which came under Azerbaijani control, there were 8 state museums and galleries with 19,311 exhibits (see Annex 1), as well as “Shushi Carpet Museum” and “Shushi Armenian Money Museum” operating on a private basis.

The report presents a number of cases of destruction and acts of vandalism against the Armenian cultural heritage during the Azerbaijani-Turkish aggression and after the ceasefire, including deliberate targeting and vandalism against St. Holy Savior Ghazanchetsots Cathedral and St. Hovhannes Mkrtich (Kanach Zham) Church of Shushi.

The analysis of the identified cases and the context of Armeniaphobia shows that the destruction and distortion of the Armenian cultural heritage are systematic and widespread. The actions and statements of the Azerbaijani state bodies and public figures show that this is a specific state policy based on the criminal policy of inciting hatred against the Armenian nation.

There are serious concerns over the preservation of these historical sites under Azerbaijani control. Given Azerbaijan’s practice of systematic destruction of Armenian cultural heritage in its territories over the last several decades, these concerns are not misplaced. Two flagrant examples are (1) the total destruction of the ancient Armenian cemetery of Julfa in Nakhichevan between 1997-2006, in which a total of 28,000 monuments (including 89 medieval churches; 5,840 unique hand-carved khachkars (cross-stones) and 22,000 ancient tombstones were destroyed; and (2) the destruction of Armenian monuments of the Tsar village in the Karvachar (Kelbajar) region. Moreover, despite the short time of control, there are already a number of known cases of vandalism against Armenian cultural heritage in Artsakh in the places that were occupied by Azerbaijan during September 27-November 9 war.

Historical revisionism by Azerbaijan is rampant in the region, which has been carried out through systemic “Albanization” of Armenian cultural property since the 1950s. In an effort to strengthen its ties to these lands, Azerbaijan revises and rewrites history by claiming that the Armenian churches and cross-stones belong to Caucasian Albanians, and that Caucasian Albanians are Azerbaijani peoples’ ancestors. The goal is to eradicate Armenian peoples’ historical roots to the region and thereby diminish their entitlement to live in and govern these areas while fabricating an Azerbaijani historical presence.

This report aims to highlight the urgency required in taking steps to protect Armenian cultural heritage in the Republic of Artsakh (Nagorno-Karabakh) and prevent its destruction once under Azerbaijani control.

After a ceasefire has been established on November 9, 2020, UNESCO made a proposal both to Armenia and Azerbaijan to send an independent mission of experts to draw a preliminary inventory of significant historical and cultural heritage sites in and around Nagorno-Karabakh as a first step towards the effective safeguarding of the region’s heritage. For the same purpose, the members of the intergovernmental Committee of the Hague Convention of 1954 for the Protection of Cultural Property in the Event of Armed Conflict and its Second Protocol (1999), adopted a declaration on December 11, 2020 and welcomed UNESCO’s initiative and confirmed the need for a mission to take stock of the situation regarding cultural properties in and around Nagorno-Karabakh. The Committee requested each of the parties to render the mission possible.

Despite the urgency of the matter as acknowledged by UNESCO, Azerbaijani Government creates an obstacle for the mission to arrive by not responding to the request.

The first part of this report sets out the deliberate targeting of Armenian cultural heritage during the recent war, in violation of the 1954 Hague Convention, to which both the Republic of Azerbaijan and the Republic of Armenia are parties, and the second part looks at Azerbaijan’s state-sponsored propaganda aimed at appropriating Armenian cultural heritage as its own and/or cleansing any traces of Armenians in regions under Azerbaijani control. 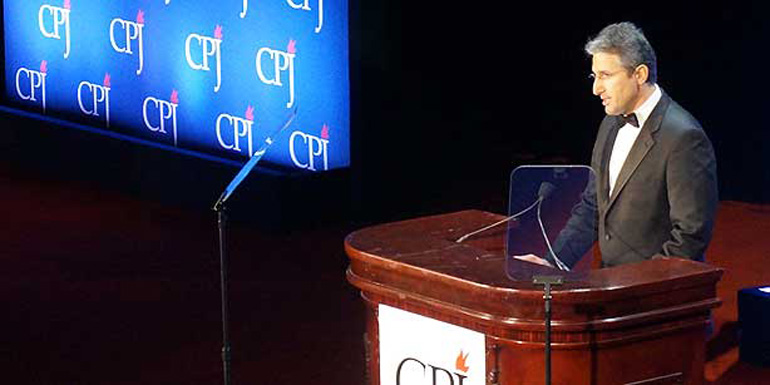 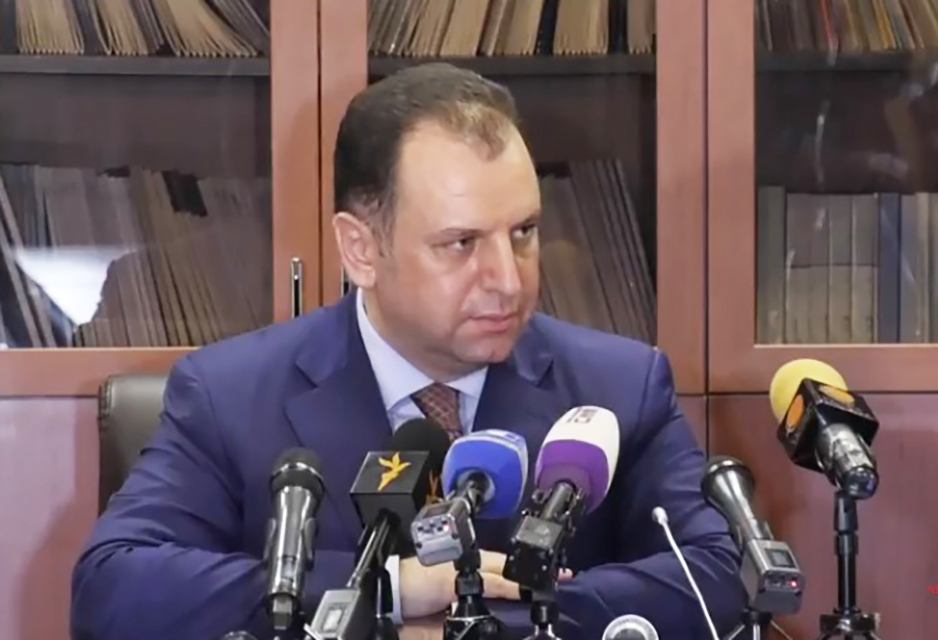 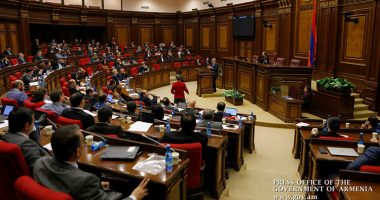