Senate Confirms Lynne M. Tracy as US Ambassador for Armenia

Last month, during the Senate Foreign Relations Committee (SFRC) business meeting on the nomination, Ranking Member Robert Menendez (D-NJ) explained his support for both candidates, as well as the importance of strong U.S.-Armenia relations.

“Armenia and the Caucasus region will continue to be vital to regional and global security. According to the OSCE, Armenia’s elections over the weekend met international standards. I look forward to supporting the government’s efforts to build strong democratic institutions, a vibrant Armenian economy, and oppose any efforts to violate Armenia’s sovereignty,” Ranking Member Menendez said.

During Ambassador-designate Tracy’s nomination hearing she promised to support Armenia’s “remarkable” democratic reforms. As to questions at the hearing by SFRC Ranking Member Menendez and Senator Ed Markey (D-MA) on the Armenian Genocide, she agreed that “1.5 million Armenians were deported, massacred, or marched to their death in the final years of the Ottoman Empire” in 1915, but fell short of properly categorizing the killings as a genocide.

“Throughout my time in the Senate, I have advocated for an honest accounting of the Armenian genocide. I believe we have a moral imperative to recognize the atrocities that were committed against the Armenian people. Ms. Tracy’s experience in Russia and Central Asia positions her to help navigate U.S. policy in this critical time. I support this nomination, but expect to work closely with Ms. Tracy on how she will encourage an honest acknowledgement of the Armenian Genocide, support Armenia’s ongoing efforts to ensure accountable, citizen-responsive governance, and support efforts to reach a peaceful settlement of the Nagorno-Karabakh conflict,” he added.

During the SFRC business meeting, Senator Menendez also noted the importance of safety in Artsakh (Nagorno Karabakh), and his expectations for the U.S. Ambassador selected to be the representative in Azerbaijan.

“I support Mr. Litzenberger’s nomination and expect to have close and continuing dialogue with him on how he will urge the Azeris to step back from any threatening behavior that could disrupt the line of contact in Nagorno Karabakh, support respect for human rights, and support efforts to reach a peaceful settlement of the Nagorno Karabakh conflict,” Senator Menendez said.

The hearing for Ambassador-designate Litzenberger occurred in October, wherein he restated the U.S. position condemning violence along the line of contact, which undermines the peace process and violates the 1994 cease-fire agreement. 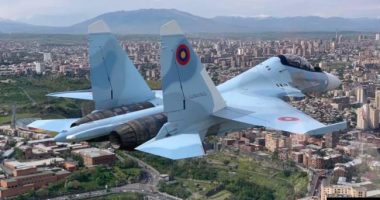