The resolution sheds light on the massacres of the 1915 Armenian Genocide and the Ottoman Empire’s attempt to systematically annihilate the Armenian people. Furthermore, it brings awareness to the Republic of Turkey’s continuous genocide denial campaign and efforts to hide its crimes against humanity.

“Being one of the co-founders that re-established ASA [at UC Santa Cruz], I have seen this organization grow over the past four years and partake in movements like this. It is very touching for me and truly shows the impact we are making on campus in order to make our voices heard. After all, they tried to bury us, but they didn’t know we were seeds and we will continue to grow!” said Tatoian, a fourth-year linguistics major and education minor undergraduate at UC Santa Cruz.

The resolution calls on SUA to not only commemorate the Armenian Genocide, but also “condemn those attempts made by governments as well as other entities, both public and private, to distort the historical reality and legal relevance of the Armenian Genocide to the descendants of its survivors and humanity as a whole.”

Through this resolution, the students hope to raise awareness about the Armenian Genocide and the ongoing denial by the Republic of Turkey and the United States. Moreover, they hope to work with SUA to educate students on campus about the cycle of genocide that continues with denial.
“For me, the passing of this resolution means a lot. Having a prominent student association recognize our cause as Armenians is a big step. But this is only the first step of many toward the recognition of the Armenian Genocide” said Nara Avakian, a first-year sociology major and global information and social enterprise studies minor undergraduate student.

Furthermore, through the passing of this resolution, SUA “supports the efforts of the Armenian-American community at UC Santa Cruz to establish April 24th as the official Day of Remembrance for the Armenian Genocide.”

“For me, this means the progress of the marginalized Armenian Diaspora. As I am a descendent of genocide survivors, it is an honor to have represented my nation in a monumental step on our campus. With Turkey launching a major anti-genocide [recognition] campaign, every step we take as Armenians towards recognition is valuable to our community” said Daniel Sarkissian, a second-year neuroscience undergraduate student.

“Passing the resolution marks the beginning of the battle for getting UC Regents, and other authorities to give up their strategic ties to bodies and companies who are active participants in Turkey’s genocide denial and normalization campaigns. At the very least, we can help to expose the role of the education industry in the widespread denial of the Armenian genocide” said Haik Adamian, a second-year anthropology major at UC Santa Cruz.

Last June, the UC Santa Cruz ASA introduced and ensured the unanimous adoption of “A Resolution to Divest from the Republic of Turkey to End the Perpetuation of the Armenian Genocide”, which calls for UC Santa Cruz, the UC Santa Cruz Foundation, and the University of California to divest $72.6 million dollars worth of University of California bonds and investments in the Republic of Turkey for its crimes in, and continued denial of the Armenian Genocide. 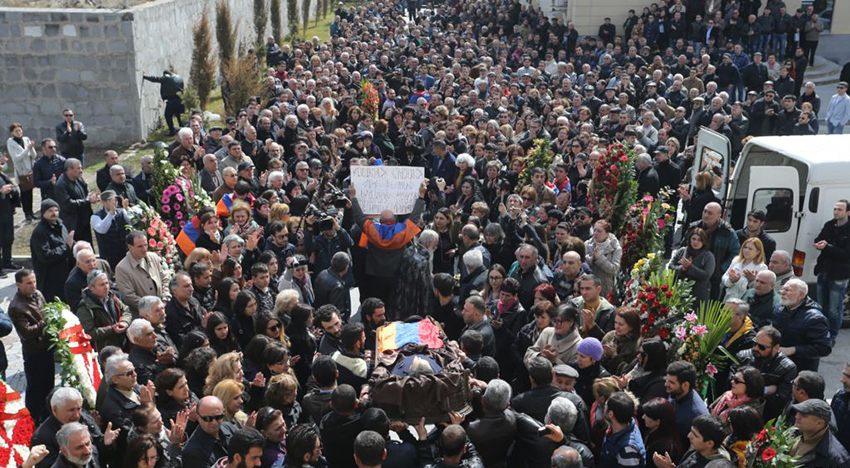 YEREVAN — Hundreds of people took part on Wednesday in the funeral…