Official Armenian sources said the talks focused on the future of Armenia’s relations with NATO as well as regional security and the current situation in the Karabakh conflict zone in particular.

The Armenian Defense Ministry said Karapetyan spoke about “NATO member Turkey’s role in the 44-day war unleashed against Artsakh.” He said that it “reduced confidence towards NATO in the task of maintaining peace and stability in the region,” the ministry added in a statement.

It did not specify whether Karapetyan, who has frequently visited Russia since being appointed defense minister in July, signaled Yerevan’s plans to reconsider its relationship with the alliance because of that.

A separate statement released by the Armenian government’s press office, said Pashinyan “attached importance, in the political sense, to cooperation with NATO.” It was not clear whether he too complained about the Turkish involvement in the six-week war stopped by a Russian-brokered ceasefire last November.

According to Pashinyan’s press office, Piriz said NATO stands ready to use its ties with regional states to contribute to peace and stability in the South Caucasus.

Turkey provided decisive military assistance, including sophisticated weapons and personnel, to Azerbaijan during the hostilities. Ankara also sent Islamist mercenaries from Syria to fight in Karabakh on the Azerbaijani side. The Turkish and Azerbaijani governments deny that.

Shortly after the outbreak of the Karabakh war, President Emmanuel Macron of France, another key NATO member state, also accused the Turks of recruiting “Syrian fighters from jihadist groups” for Azerbaijan.

“A red line has been crossed, which is unacceptable,” Macron said on October 1, 2020. “I urge all NATO partners to face up to the behavior of a NATO member.”

Armenian President Armen President Armen Sarkissian brought up the matter with NATO Secretary General Jens Stoltenberg when they met in Brussels later that month. At a joint news conference with Stoltenberg, Sarkissian charged that Turkey is also obstructing international efforts to broker an Armenian-Azerbaijani ceasefire.

Stoltenberg expressed serious concern about the hostilities but stopped short of criticizing Ankara. He said that NATO is “not part of this conflict.” 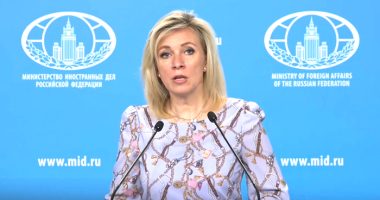 MOSCOW — Russia indicated on Wednesday that it does not regard potential…