YEREVAN (RFE/RL) — Senior officials in Armenia and Nagorno-Karabakh dismissed on Thursday a Russian newspaper report which has fueled renewed speculation that Russia is pressuring the Armenian side to make unilateral territorial concessions to Azerbaijan.

Writing on Russian Foreign Minister Sergey Lavrov’s latest visit to Yerevan, the Moscow daily “Kommersant” said earlier this week that one possible Armenian-Azerbaijani peace deal currently under discussion envisages the liberation of virtually all districts around Karabakh that were occupied by Karabakh Armenian forces during the 1991-1994 war. In return, it claimed, Baku would only pledge not to try to reconquer Karabakh itself.

The paper, which cited anonymous Russian sources, made no mention of other elements of the Basic Principles of a Karabakh settlement put forward by the U.S., Russian and French co-chairs of the OSCE Minsk Group. Those include a future referendum in Karabakh on the disputed territory’s internationally recognized status.

Some Armenian commentators and media outlets have seized upon the “Kommersant” report to renew their allegations that Moscow is seeking unilateral Armenian concessions to Baku as part of its efforts to lure Azerbaijan into the Russian-led Eurasian Economic Union (EEU). They claim that this was the main purpose of Lavrov’s talks in Yerevan with President Serzh Sarkisian and Foreign Minister Edward Nalbandian.

One of Nalbandian’s deputies, Karen Nazarian, brushed aside the speculation. “It’s possible that there was a discussion [with Lavrov] on the overall process of resolving the Nagorno-Karabakh conflict, but I don’t think that such an issue was on the agenda,” Nazarian told reporters.

“Putting aside certain elements [of the Basic Principles] and discussing them separately is unacceptable not only to us but also the co-chairs,” he said.

A senior Karabakh official, Davit Babayan, also denied the alleged Russian pressure. He argued that while in Yerevan Lavrov publicly criticized lawmakers from the Council of Europe for approving a pro-Azerbaijani draft resolution on the Karabakh conflict.

Babayan also said that a unilateral Armenian withdrawal from the territories around Karabakh would only increase the risk of another Armenian-Azerbaijani war. “If something in this [status quo] changes then there will be unpredictable developments that would make the South Caucasus a more severe warzone than Syria and Iraq put together,” he told RFE/RL’s Armenian service (Azatutyun.am). “And this would not be beneficial for Russia.”

The authorities in Yerevan and Stepanakert have long said that territorial concessions to Baku must be tied to an agreement on Karabakh’s status. 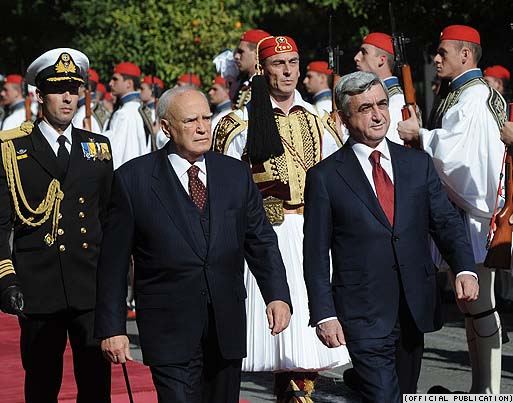