Armenian Literary Tradition Presented at the US Library of Congress

WASHINGTON, DC — Armenian Area Specialist Levon Avdoyan will discuss his book “To Know Wisdom and Instruction” at the 2015 Library of Congress National Book Festival, to be held on 5 September at the Walter E. Washington Convention Center in Washington, D.C. The book talk, dedicated to the Armenian literary tradition, will take place in the Library of Congress Pavilion, Fine Books & Collections magazine reports.

Drawing from the Armenian collections of the Library of Congress, the ebook contains 75 color images highlighting the varieties of the Armenian literary tradition from the era of manuscripts through the early periods of print and on to contemporary publishing.

Featured manuscripts range from 14th- and 15th-century gospel books hand-copied by monks to 19th-century works on palmistry (Constantinople, 1894), firefighting (Venice, 1832), cotton production (Paris, 1859) and the first modern Armenian novel, “Armenia’s Wounds,” by K. Abovyan (1848). The first complete Armenian language printed Bible from Amsterdam in 1666 is also included, with a richly illuminated missal copied in 1722 for the use of the celebrant of the Armenian liturgy. With these comes a rare 19th-century musical manuscript by Pietro Bianchini, who was the first to transcribe the Armenian liturgy using European musical notation. A 20th-century Soviet edition of the Armenian national epic, “David of Sasun,” (1962) is one of the more contemporary items included in the collection.

The Library’s exhibition, “To Know Wisdom and Instruction,” can be viewed online at loc.gov/exhibits/armenian-literary-tradition/.

The Library’s African and Middle Eastern Division (www.loc.gov/rr/amed/) is the center for the study of 78 countries and regions from Southern Africa to the Maghreb and from the Middle East and the Caucasus to Central Asia. The division’s Near East Section is a major repository for Armenian language materials on a wide variety of subjects in varied formats. 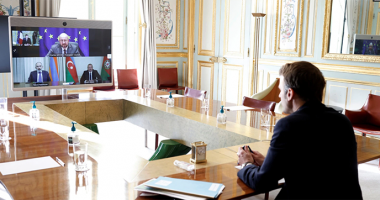