YEREVAN (RFE/RL) — Kim Kardashian, the world-famous U.S. reality TV star of Armenian descent, began on Wednesday a first-ever visit to Armenia that will put her ancestral homeland under an international spotlight.

Kardashian arrived at Yerevan’s Zvartnots airport together with her husband, American rapper Kanye West, daughter North and sister Khloe. They were accompanied by camera crews from a E! channel that will film several episodes of the reality series “Keeping Up With The Kardashians.”

No official meetings or press conferences are planned during the high-profile trip timed to coincide with the 100th century of the Armenian genocide in Ottoman Turkey. Kardashian and her family members are expected to visit the genocide memorial in Yerevan.

In her social media posts closely followed by tens of millions of people around the world, Kardashian, 34, has repeatedly called for a greater international recognition of the Armenian genocide. “Until this crime is resolved truthfully and fairly, the Armenian people will live with the pain of what happened to their families and the fear of what might happen again to their homeland,” she wrote in 2011.

Kardashian declined to talk to Armenian reporters when she emerged from Zvartnots’s VIP lounge guarded by over a dozen police officers and security agents. She and her entourage proceeded to downtown Yerevan in a motorcade escorted by a police car.

Police were also deployed outside the city’s Armenia Marriott Hotel where Kardashian and her family will stay for the next few days. Kardashian waved to about 100 sympathizers, curious onlookers, photographers and cameramen standing nearby as she made her way into the hotel. 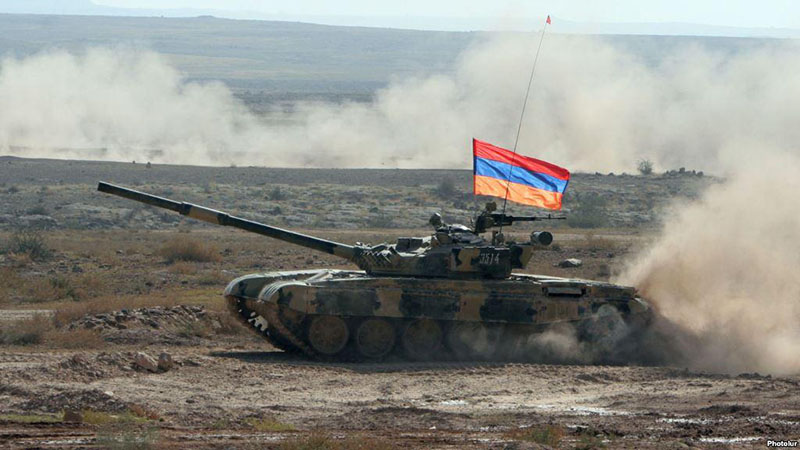 MOSCOW — More than 1,200 military from 22 countries have already arrived…