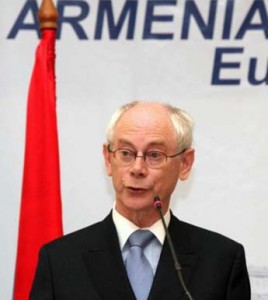 YEREVAN — The Armenian government is “on the right track” in carrying out democratic reforms and can therefore count on greater financial assistance from the European Union, EU President Herman Van Rompuy said during an official visit to Yerevan on Wednesday.
Speaking after talks with Presiden President Serzh Sarkisian, Van Rompuy reaffirmed the EU’s largely positive assessment of Armenia’s recent parliamentary elections but said a presidential ballot due next February should be even more democratic.
“I encourage Armenia to continue on this path towards strengthening its democratic institutions, to promote transparency, to root out corruption and to respect human rights and the rule of law, including the right to free speech and press,” he told a joint news conference with Sarkisian. “You are, President Sarkisian, on the right track, even if there is still a lot of work ahead.”
“The European Union welcomes the efforts which the Armenian authorities made to deliver more competitive and transparent parliamentary elections [on May 6,]” he said. “This was an important step forward. However, as identified in the Final Report by the OSCE/ODIHR Election Observation Mission, some issues remain to be addressed. We trust that this will be done before the upcoming presidential elections.”
“On this basis, I am pleased to say that the [EU’s executive] European Commission will now be in a position to start preparations of a donor conference with Armenia and international financial institutions,” added the head of the EU’s top decision-making body, the European Council.
Sarkisian, for his part, declared that his government’s and the EU’s evaluations of the Armenian parliamentary elections are identical. “Those were the best elections in the history of newly independent Armenia, but a lot still needs to be done for a further improvement of the electoral process,” he said. “I reaffirmed our readiness to make fresh progress in the organization and conduct of the 2013 presidential elections.”
A spokesman for EU Enlargement Commissioner Stefan Fuele told RFE/RL last week that the freedom and fairness of the 2013 vote, in which Sarkisian will be seeking a second term in office, is essential for the holding of the donor conference.
Van Rompuy announced that the EU will provide Yerevan this year with 15 million euros ($19 million) in additional assistance within the framework of its Eastern Partnership program.
The program offers Armenia and five other former Soviet republics the prospect of closer partnership with the 27-nation bloc in return for sweeping political and economic reforms. Each of them is eligible for an “association agreement” with the EU.
Van Rompuy praised “good progress” in the EU’s ongoing association talks with Armenia both at the news conference and in other public statements made in Yerevan. He noted the recent launch of formal Armenia-EU talks on free trade and visa facilitation, key elements of the association accord.
“Armenia’s commitment to reforms based on the core values of the European Union, and geared at approximating to the standards and norms of the EU is very welcome. This is clearly a strategic choice made by Armenia,” the Belgian politician told a conference of local non-governmental organizations later in the day.
Armenian opposition and civic groups regularly question the Sarkisian administration’s stated commitment to those norms. Unlike the EU, they have denounced the May elections as fraudulent.
Van Rompuy repeatedly stressed in Yerevan the importance of a peaceful solution to the Nagorno-Karabakh conflict for Armenia’s European integration. “The European Union will continue to insist that Armenia and Azerbaijan step up their efforts to reach agreement,” he said in an address to the Armenian parliament.
In that context, the EU president expressed “great concern” at recent truce violations in the conflict zone. “The European Union calls on both sides strictly to respect the ceasefire and exercise restraint, on the ground and in public statements, in order to prevent a further escalation of the situation,” he said.
Van Rompuy also called for an unconditional normalization of Turkish-Armenian relations advocated by Armenia. “The European Union will continue to encourage both sides to remain committed to the process of normalization of bilateral relations, without preconditions from any side,” he told the National Assembly. 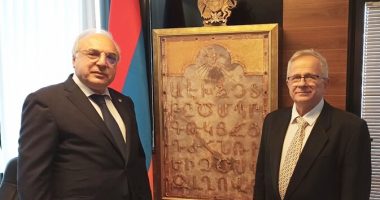 TEL AVIV — Armenia has inaugurated its embassy in Israel one year… 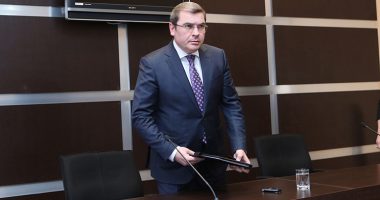