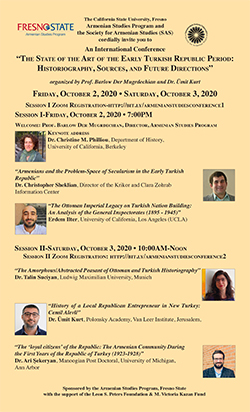 FRESNO — The Armenian Studies Program will hold an international conference on “The State of the Art of the Early Turkish Republic Period: Historiography, Sources, and Future Directions” on Friday, October 2, and Saturday, October 3, 2020. The Society for Armenian Studies (SAS) is a co-sponsor of the conference. The conference will be held virtually as a Zoom webinar. The registration link for Friday is: http://bit.ly/armenianstudiesconference1. The registration link for Saturday is: http://bit.ly/armenianstudiesconference2.

Organized by Prof. Barlow Der Mugrdechian (Armenian Studies Program, California State University, Fresno) and Dr. Ümit Kurt (Polonsky Fellow, Van Leer Institute, Jerusalem and Lecturer in the Hebrew University of Jerusalem), the conference will explore the early Turkish Republican period. The modern state of Turkey – formally established on October 29, 1923, under the leadership of Kemal Ataturk – came into existence in the period 1908-1945, in which traumatic and revolutionary developments followed each other in quick succession: the constitutional revolution, eleven years of war, mass migration and mass murder, the end of a 600-year old empire and the almost partition of the remains among the victors in World War I and the foundation of Turkish Republic.

Armenians remained in the new Turkish Republic and experienced these developments. At the same time, it is the period of political experiments, the building of a national economy, and the birth of Turkish nationalism. The republic is both heir to all of these developments and a daring experiment in nation building and modernization.

This conference aims to use the historical context of the collapse of the Ottoman Empire and the emergence of a new nation state, the Republic of Turkey, to discuss and analyze major issues that played a dominant role in the history of this period: the emergence of the modern state, the impact of war, nationalism and nation building, and the role of religion and secularism.

The Thomas A. Kouymjian Family Foundation, the Leon S. Peters Foundation, and the M. Victoria Kazan Fund for Armenian Studies are supporters of the Conference.

Prof. Barlow Der Mugrdechian will open the Conference at 7:00PM on Friday, October 2. A keynote address will be given by Dr. Christine Philliou (University of California, Berkeley).

The first session will then open with two panelists: Christopher Sheklian (the Krikor and Clara Zohrab Information Center, New York) “Armenians and the Problem-Space of Secularism in the Early Turkish Republic” and Erdem Ilter (UCLA) “The Ottoman Imperial Legacy on Turkish Nation Building: An Analysis of the General Inspectorates (1895 – 1945).

The Conference will reconvene at 10:00AM on Saturday, October 3, with one session, which will feature presentations by Talin Suciyan (Ludwig Maximilian University, Munich) “The Amorphous/Abstracted Peasant of Ottoman and Turkish Historiography”; Ümit Kurt (Van Leer Institute, Jerusalem) “History of A Local Republican Entrepreneur in New Turkey: Cemil Alevli”; and Ari Sekeryan (Manoogian Post-Doctoral Program, University of Michigan, Ann Arbor) “The ‘loyal citizens’ of the Republic: The Armenian Community During the First Years of the Republic of Turkey (1923-1928).”