YEREVAN — The director of Armenia’s main maternity hospital and two other officials were arrested on Wednesday on suspicion of forcing young women to abandon their babies who were subsequently adopted by foreigners paying bribes.

The Investigative Committee made the arrests as part of a criminal investigation launched by another law-enforcement agency, the National Security Service (NSS), earlier this year.

The arrested officials are the head of Armenia’s largest maternity hospital, Razmik Abrahamyan, his deputy Arshak Jerjeryan and the director of a Yerevan-based state orphanage, Liana Karapetyan. They are suspected of having forced young women to abandon their babies who were adopted by foreign nationals in 2016-2018. The latter allegedly paid hefty bribes for those adoptions.

The Investigative Committee also arrested later on Wednesday another person as part of the extensive criminal investigation launched by Armenia’s National Security Service this summer. That person has not yet been identified.

In a November 14 statement, the NSS claimed to have found evidence of three dozen Armenian children have been illegally adopted by Italian nationals. In particular, it said, in 2016-2018 several officials used threats, blackmail and lies to convince over a dozen pregnant (and presumably unmarried) women to abandon their expected children. According to government data, a total of 54 Armenian children were adopted by foreign nationals.

According to the statement, immediately after their birth the children were taken to state-run orphanages whose senior employees later arranged their adoption by foreigners through forgery of their medical records and other violations of adoption rules set by the state. The NSS said that members of the crime ring made sure that Armenian citizens could not adopt the babies.

The Investigative Committee chief, Hayk Grigoryan, said all arrested officials will be formally charged by the end of this week with illegal separation of parents from their newborn babies. “We have testimonies by a number of persons which unmask the crimes committed by those [arrested] individuals,” Grigoryan said during a cabinet meeting chaired by Prime Minister Nikol Pashinyan.

Pashinyan said that he had ordered the NSS and the Armenian police to look into the matter after hearing allegations about serious abuses committed during child adoptions in Armenia. He said he was initially skeptical about the veracity of the allegations.

“But now, in retrospect, maybe our evaluations were not correct, maybe the emotions of those people [who alleged the abuses] were based on concrete facts,” Pashinyan told ministers and other officials. “All these cases must be investigated one by one.” 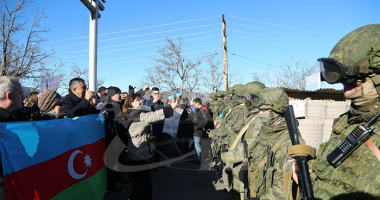 BY LILIA SHUSHANYAN The dictatorial regime of Azerbaijan continues to keep the…
BY K. M. GREG SARKISSIAN August 23, 2021: In 2015, I was…