“I was here when the cathedral was born, and I witnessed the cornerstone blessing and the raising of the girders of St. Vartan Cathedral in New York,” said speaker , Rev. Fr. Garabed Kochakian . He was introducing the topic of his lecture, titled “Holy Building, Holy Place: The Breath of Faith and Worship in St. Vartan Cathedral.”

The presentation on October 11 which elucidated the meaning of the architecture and art of New York’s St. Vartan Armenian Cathedral, took place in the cathedral sanctuary, and was hosted by the Eastern Diocese’s Krikor and Clara Zohrab Information Center. It’s director, Dr. Christopher Sheklian, has oriented the center’s fall lecture season around different aspects of St. Vartan Cathedral, to honor its 50th anniversary.

Fr. Kochakian —a long-serving priest of the Diocese, who once served as Diocesan Chancellor—is an art historian specializing in Armenian devotional art and architecture. The author of books and essays on the iconography of the Armenian Church, Fr. Kochakian offered an eye-opening discourse on the meaning and symbolism of the cathedral’s artistic features. 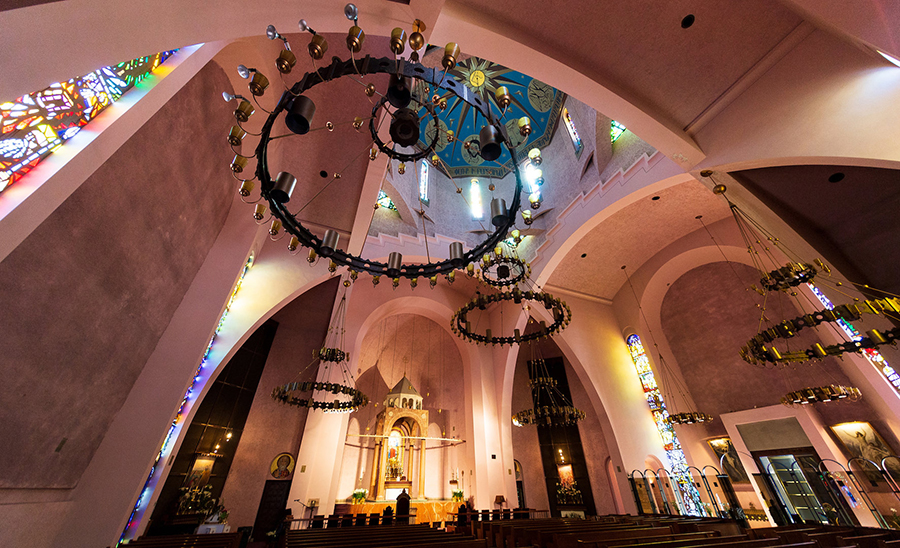 A Ship to Eternity
Fr. Kochakian began his exploration with a simple question: “ What is the church?”

His answer: “It is the sign, symbol, icon of the image of heaven. It’s like a ship which carries us to eternity to meet God. ?It is a place of hopes, aspirations—as well as an area to protect.”

Describing the symbolic layout of the building, he spoke of a sense of “rhythm” built around the number eight, which “as a written figure symbolizes eternity, and as a quantity represents the ‘eighth day’: the day of the new creation, when Christ was raised from the grave.” He noted that eight steps ascend from the cathedral plaza to the platform leading into the sanctuary.

The church chandeliers, he said, are based on those in the majestic cathedral of Ani in Armenia, and again the lights are arranged in multiples of eight. The dome with its eight windows and eight medallions depicts the days of creation.

From Creation to Creator
In the center of the cathedral dome is the powerful Armenian Christian symbol “Eh”: the seventh letter of the Armenian alphabet. Fr. Kochakian explained that it also articulates a complete thought: “He Is”—which echoes the Divine Name of God as He presented it to Moses: “I AM WHO I AM.”

Fr. Kochakian described the major zones of the cathedral sanctuary as the Entry, the Nave (named for the “ship” of that carries us securely over the turbulent waters of life), and the Altar, which is elevated on a stage called the “bema”—a name derived from Hebrew, and meant to “symbolize of the height of heaven, the throne of God, the presence of the divine on earth.”

He noted that the position of the altar means that prayers in the sanctuary are spoken in an Easterly direction: “towards the location where Jesus was born, lived, rose from the dead, and where Christ will come again.” The praying congregation faces the altar icon depicting the Virgin Mary, who Fr. Kochakian called “the pre-eminent saint in our church.”

Finally, he noted that church doors often contain images that symbolizes entry from the outside world into the kingdom of heaven. The bronze entry doors of St. Vartan Armenian Cathedral—in the design of which Fr. Kochakian participated—tell just such a story of entry into a holy kingdom, keyed to the turning point in Armenian history: namely, the baptism of King Drtad by the hand of St. Gregory the Illuminator, whereby Armenia became the world’s first Christian kingdom.

In the course of his talk, the speaker paid tribute to the men who designed the cathedral and its decorations: architect Walker O. Cain, and artist Bogdan Grom , who created the stained-glass windows and the sanctuary’s original sculptural features.

At the conclusion of the lecture, following a brisk question and answer period, a reception was held in Guild Hall of the Diocesan Center, where Fr. Kochakian entered into an enthusiastic exchange of ideas with the audience members. 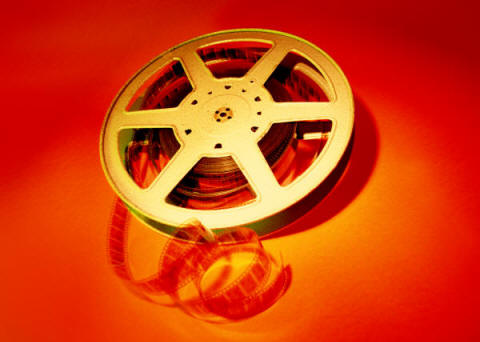 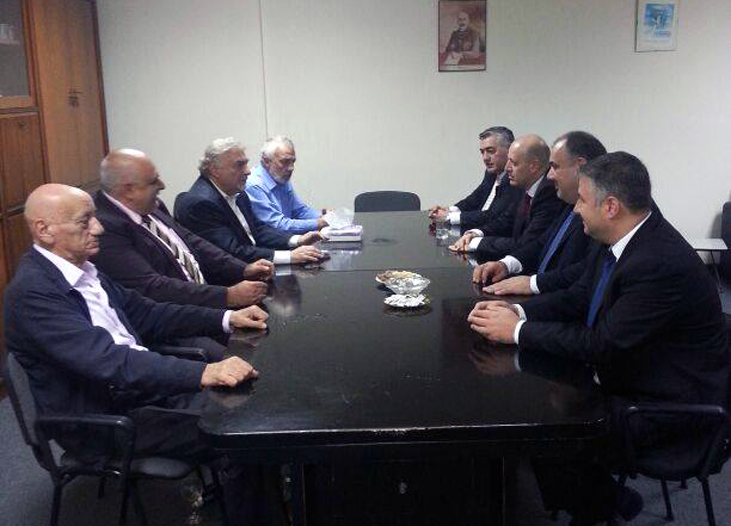