Home Armenian Genocide Communities Across the U.S. Mobilize to Bring ‘Intent to Destroy’ Documentary to Theaters for One-Night-Only Screenings

Communities Across the U.S. Mobilize to Bring ‘Intent to Destroy’ Documentary to Theaters for One-Night-Only Screenings 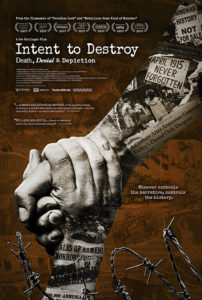 Produced by Survival Pictures (The Promise), RadicalMedia, and Third Eye Motion Picture Company in association with Bloom Project, Berlinger’s 13th feature-length documentary embeds history with the story of director Terry George’s exploration of the Genocide through his film The Promise. That includes the subsequent campaign launched by genocide deniers.

The film shines a light on the Armenian Genocide — whose witnesses and descendants are still fighting to be officially acknowledged as such by the international community including the United States: how it was carried out during World War I as the reign of the Ottoman Empire drew to a close, and how it laid the groundwork for the genocides that followed. Berlinger interviews historians, scholars, and high-profile filmmakers in his exploration of the tangled web of responsibility that has driven a century of denial by the Turkish government and its strategic allies.

Berlinger has won two Emmys and has been nominated in the feature doc category for an Oscar. His work includes Brother’s Keeper, the Paradise Lost trilogy, and Metallica: Some Kind of Monster.

Theatrical On Demand® allows individuals the opportunity to organize and promote screenings of Intent to Destroy in movie theaters across the country. With Theatrical On Demand®, you can bring this film to your local movie theater. You just pick the date, time, and theater where you want to host your screening. Gathr Films will set everything up for you at no cost. All you have to do is promote the film and get people to reserve tickets.

Anyone can Captain a movie screening, whether you’re an individual, an organization, or social club. Nonprofits can also add a feature that allows ticket purchasers to make an optional donation to their organization.

You can help bring Intent to Destroy to a theater near you by hosting your own screening and spreading the word. Intent to Destroy is an experience, and the full meaning and value of this film can only be experienced in a high-quality cinema with a big screen, great sound, and large audience. This film is dedicated to the estimated 1.5 million victims of the Armenian Genocide, and to all victims of mass slaughter around the world. May their suffering never be forgotten.

You may set up a screening by visiting: http://gathr.us/films/intent-to-destroy/new-screening-request/t/itdgo or by emailing Haig Boyadjian at [email protected]