ISTANBUL (Agos) — Istanbul’s Armenian community is set to open a new school building in the city’s Bakirköy district for the 2015-2016 academic year, replacing an older building that had served for 171 years.

“I am very happy to see that the school is almost completed. Moving to a new building after 171 years makes us all happy,” Surp Asdvadzadzin Church Foundation head Mesut Özdemir said.

The Bakirköy Municipality exempted the Armenian school from certain fees to smooth the construction process. Despite such assistance, Özdemir said financing was challenging for the community, and the foundation depended on a number of fund-raising efforts to finish the job.

The first day of the new school year, Sept. 28, will be the new Armenian school’s official inauguration day.
The Bakirköy district on Istanbul’s European side had housed one small school built over 170 years ago by Ottoman Armenian notable Hovhannes Dadyan.

Over the decades, the Armenians of Bakirköy have depended on that single school, but as their numbers increased capacity became a problem. The school currently has to accommodate 400 children – far more than the old building was able to cater for.

Özdemir said the school will now be able to offer a kindergarten service to the Armenian community, which will increase the number of students to 500.

“We now have a bigger sports and conference hall,” said Özdemir, adding that parents and students had toured the site while it was still under construction and were excited for the upcoming school year.

There are currently 22 minority schools across Istanbul: Five of them are Greek, one is Jewish, and the remaining 16 are Armenian.

With a legal amendment in 2008, minority communities were allowed to acquire and renovate properties in their name while also several of their previously confiscated properties were returned.

Minority schools are regulated by the 1923 Treaty of Lausanne, which allowed Greek, Armenian and Jewish minorities to open their own schools. According to the treaty, the state must allocate money and the curriculum is determined by the state; the schools are able to offer education in both Turkish and their own languages.

Over 3,000 students currently attend one of Istanbul’s 16 Armenian schools. 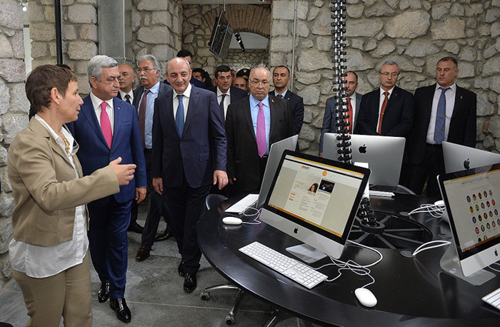