BAKU — Armenia is a “fascist state” created on “historic Azerbaijani lands” that will eventually will be won back by Azerbaijan, according to Ilham Aliyev.

“Not only Nagorno-Karabakh but also a substantial part of modern Armenia is ancient Azerbaijani territory,” Aliyev declared on Wednesday during celebrations of Nowruz, the Persian New Year.

“Azerbaijan will restore its territorial integrity and sovereignty,” he said, according to the APA news agency. “We, Azerbaijanis, will return to Nagorno-Karabakh, other occupied lands and all historic lands of Azerbaijan. I don’t doubt it,” he added, pointing to his country’s “growing economic and military might.”

“Armenia is a fascist state,” continued Aliyev. “Their national ideology is fascism, discrimination and nationalism.”

“I am absolutely convinced that the growing power of Azerbaijan, our potential and forethought foreign policy will allow us to restore our territorial integrity. No other way. The course of history, our demographic development, economic potential allow us to say that the day when the national flag of Azerbaijan will flutter in Shusha, Khankendi is not far away. We need to become even stronger to do this. In the international arena, there are double standards. We are also victims of double standards. In the settlement of international relations the power factor is coming to the foreground. We must become and are becoming even stronger, “- stated Aliyev.

The bellicose remarks came amid international mediators’ efforts to arrange another meeting between Aliyev and President Serzh Sarkisian which they hope will push forward the Nagorno-Karabakh peace process. Artur Baghdasarian, the secretary of Armenia’s National Security Council, said on Thursday that Aliyev and Sarkisian could meet as early as next week.

Both presidents are expected to attend the global Nuclear Security Summit in The Hague scheduled for March 23-25.

Aliyev already vowed to reconquer “historic Azerbaijani lands” in Armenia during a January 21 visit to Azerbaijan’s second largest city of Gyanja. He spoke there less than two days after a deadly firefight in northeastern Karabakh which the Armenian military said was the result of a failed Azerbaijani commando attack on its frontline positions.

The armed incident led to a sharp escalation of tensions on “the line of contact” around Karabakh and the Armenian-Azerbaijani border. It also appears to have delayed the next Aliyev-Sarkisian meeting which the U.S., Russian and French mediators hoped to organize in February. 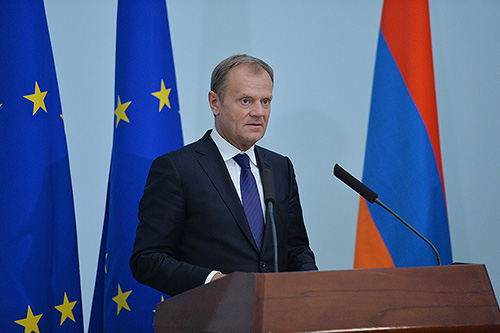