Electricity production in Armenia has fully recovered from major problems it was facing in early 1990s and is now a reliable industry. Armenia’s energy issues started after the 1989 earthquake when the government of Soviet Armenia was forced to close the Metzamor nuclear power plant in 1990 under mounting pressure from a public that was concerned about safety issues related to the plant, fearing a Chernobyl type catastrophe.

In 1987, people in Armenia started demonstrating against Soviet rule. After the devastating earthquake of 1989, some activists started demanding the closure of Metzamor nuclear plant as well as the Nairit chemical and rubber producing complex. Shutting down the nuclear plant was the worst mistake of the recent Armenian history. Had the nuclear plant not been closed, Armenia would not have plummeted in to the dark ages and as a result would have not lost one third of its population to forced economic immigration. After more than 20 years, Armenia still has not recovered from the devastation caused by these closures.

Because Armenia does not have oil or gas it had been relying on gas and oil imports from Russia to operate its thermal power plants. Gas was being delivered via pipeline and oil via train, both traversing Azerbaijan. When as a result of the war, Azerbaijan imposed a blockade; Armenia was cut off from its gas and oil supplies. Due to the lack of required fuel, thermal power plants were shut down and Armenia had to rely only on its hydro power production from the Sevan-Hrazdan and Vorotan cascades. These two hydro power cascades were not operating at full capacity because required parts could not be delivered from Russia via train that had to go through Azerbaijan. Industrial production ceased due to the lack of electricity and fuel, resulting in the economy’s collapse.

Armenia’s energy sector has seen tremendous change in the last two decades. Restarting the second unit of the nuclear power plant in 1995 helped bring an end to the energy crisis. The availability of electricity service has increased from just a few hours a day from two decades ago to 24 hours a day. Electrical production companies have emerged from heavy dependence on state funding to commercial viability. However, the same issues that caused the collapse of the system in the mid-90s still exist; Armenia still relies on imported gas and oil for its energy production. A majority of the gas is imported from Russia via a pipeline through Georgia and a small amount of gas is being imported from Iran also via a pipeline. Gasoline and heavy fuel oil are delivered from Russia via tanker trucks. Uranium for operating the nuclear power plant is also imported from Russia.

Armenia’s electricity system has 3,914 Mega Watt (MW) of installed capacity, of which only 73 percent or 2,845 MW is currently operational. Electricity is produced by three generation sources: nuclear (34 percent), thermal (32 percent), and hydropower (34 percent). The share of thermal and hydropower plants in the capacity and production mix has increased in recent years because new plants have been built and Armenia has experienced weather conditions over the past several years that have been favorable for hydro power production.

The Metzamor nuclear power plant provides base load capacity. The Vorotan and Sevan-Hrazdan Cascade hydro power plants provide daily load regulation, while thermal power plants operate to meet winter’s peak demand and to serve as the base load a few weeks in fall when the nuclear power plant goes offline for maintenance. Figure 1 shows the composition of available capacity and production in Armenia. 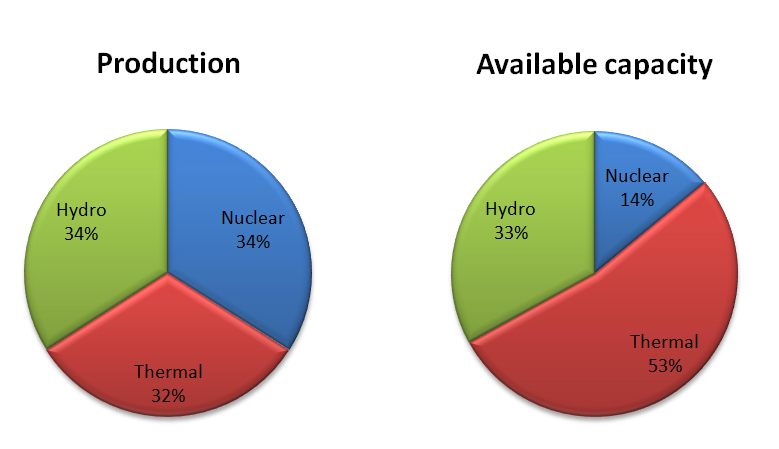 Thermal Power Plants
The main thermal power plant complexes are in Hrazdan and Yerevan. The original equipment at these two gas-fired plants has worked beyond the 200,000 work hour design life and does not meet international technical, economic, and environmental performance standards. These plants have not undergone necessary capital improvements in recent years and operations and maintenance have been consistently under-funded. The plants run on outdated Soviet technology and obtaining spare parts for maintenance is difficult and costly because the equipment is no longer manufactured. 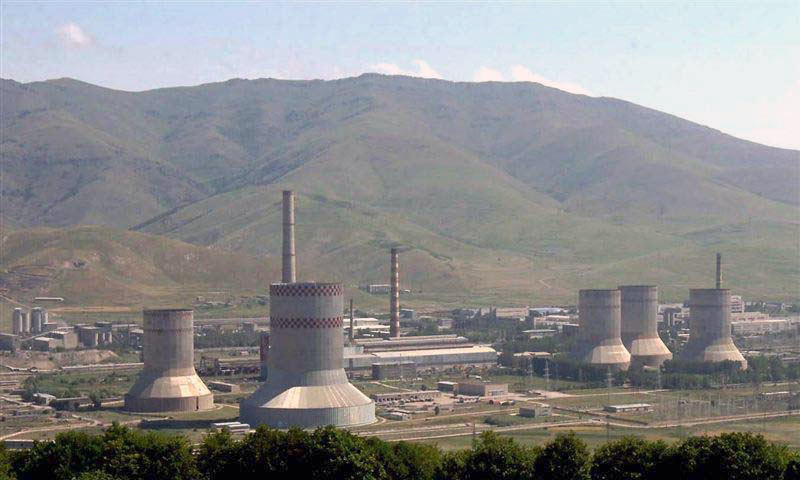 A view of the Hrazdan thermal power plant complex.

The first of seven turbines of the Yerevan thermal power plant with a capacity of 50 MW began operation in 1963. The totaled installed capacity of Yerevan thermal power plant complex is 550 MW but today only one of the older generating units remains operational with capacity of approximately 50 MW. This complex has operated for more than 40 years, although the lifespan of thermal power plants throughout the world is 30 years. A new 240 MW combined cycle gas turbine at the Yerevan thermal power plant complex came online in 2010 which was constructed with a $247 million loan from the Japanese Bank for International Cooperation. The loan was given in 2007 with an interest rate of 0.75%, and a 40-year term, with a 10-year grace period. This gas-powered turbine is able to generate approximately one-quarter of Armenia’s current electricity output. This unit is also twice as efficient as the plant’s decommissioned units.

The new plant was constructed with an aim to reduce the generation cost of 1 KW/hr electricity from the current 400 drams to 160-170 drams. Construction of the second and third power plants on the same site is being considered by the Government of Armenia.

There are also two other small plants in Armenia. The Yerevan Thermoelectric Plant has only one turbine with capacity of 50 MW and it produces electricity, steam, and heat mainly for the Nairit Chemical Plant. The Vanadzor Thermoelectric Plant, with a capacity of 50 MW, is presently not operating and will be operated only if the Vanadzor chemical complex becomes operational.

Nuclear Power Plant
The Metzamor nuclear power plant was built during the 1970s, about 19 miles west of Yerevan. The total capacity of the two units at Metzamor is close to 800 MW but only one of the units is operational. The plant is one of just a few remaining nuclear power reactors in the world that were built without primary containment structures. The plant has been operated by a Russian company, Inter RAO UES since 2003, as part of an agreement to help pay off Armenia’s debts to Russia. The 400 MW operational unit is beyond its 30 year design life and scheduled for decommissioning in 2021. Armenia will face a major supply-demand gap once the nuclear power plant is retired and that is the reason why the government of Armenia is trying to secure financing to build a new nuclear power plant which is estimated to cost approximately $4 billion.

Hydro Power Plants
Historically, hydropower has constituted a large part of Armenia’s electrical energy production resources. There are two large hydropower cascades, Sevan-Hrazdan and Vorotan that have a combined installed capacity of approximately 960 MW. As of 2012, there were more than 110 commercial size small hydropower power plants (SHPP) operating in Armenia. About 60 of these have been developed and constructed in the past 10 years. There are also numerous small units (micro) that are operated by individuals to satisfy their own electrical needs. The forecast is that SHPP generation would grow from its current 5% penetration level of the total electricity generation to 10% within the next 10 years.

The Sevan-Hrazdan Cascade Hydropower System is one of the most important hydropower generation assets in Armenia. It was built between 1936 and 1961. The system consists of seven run-of-the-river hydropower stations, canals, and reservoirs between Lake Sevan and the City of Yerevan. With a total installed capacity of 565 MW, it currently supplies about 10% of the country’s electricity, and plays a significant role in supporting the balance of the electric grid and providing affordable energy. This system is majority owned by Russian RusHydro Company, one of the largest hydropower companies in the world.
The Vorotan Complex is the second largest hydroelectric power plant in Armenia. It has three stations with total installed capacity of 404 MW. The first unit came online in 1970 and the last one in 1989. Figure 3 shows Unit 2 of the Vorotan Complex. Armenia’s Government is planning to sell the Vorotan Cascade to ContourGlobal L.P., which is a New York-based independent power producer. It develops, acquires, and operates electric-power and district-heating resources primarily in underserved and overlooked markets worldwide. 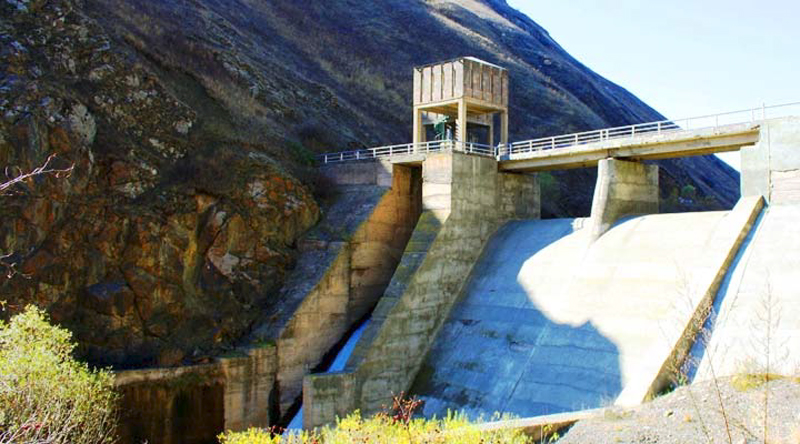 Unit 2 of the Vorotan Complex

System Reliability
Reliable and affordable energy supply is critical for economic growth. The Government has set a target of 5-7 percent GDP growth, which is expected to result in increased demand for energy resources. Key areas of economic growth include the industrial, as well as the commercial, and retail services sectors. These sectors accounted for 45 percent of GDP in 2011 and have been the largest contributors to GDP growth in the past two years. These sectors are energyintensive, accounting for 81 percent of non-residential electricity consumption and 51 percent of total domestic consumption.

The country’s heavy reliance on imported natural gas to generate much of its power makes the sector susceptible to fuel supply interruptions. Inefficient generation, transmission, and distribution infrastructure means that the power sector must use more imported fuel to provide the same level of electricity service than it would if this infrastructure were more efficient.

Renewable Energy Resources
Armenia is planning to diversify its electricity generation and fuel supply sources by exploiting domestic renewable resources. Significant renewable energy potential exists, but the government has struggled to attract private investors for non-hydro renewable projects. It is estimated that Armenia has more than 1,000 MW of technically viable capacity from solar photovoltaic (PV), 300-500 MW from wind, 250-350 MW from unexploited small HPPs and 25 MW from geothermal. There is also potential for producing roughly 100,000 tons per year of biofuel from local plants to be used as gasoline additive.

Electricity Trade with Neighboring Countries
The government of Armenia has negotiated electricity trade agreements with Iran and Georgia to improve energy security and affordability. Armenia negotiated a gas-electricity swap arrangement with Iran under which it exports 3 kWh of electricity in exchange for 1 m3 of gas from Iran. Trade with Georgia is limited because of an asynchronous connection between the two systems. In the short-term, increased trade with Georgia would allow Armenia to export its excess hydropower generation during spring and summer to Turkey via Georgia. In the long term, if Armenia builds a new nuclear plant, additional transmission capacity will be needed to export electricity from the plant because the planned nuclear plant will be significantly larger than what is needed for domestic demand. If Armenia does not build a new nuclear plant, additional transmission interconnection capacity could help Armenia to meet its supply gap with relatively cheap hydropower imports from Georgia.

Areg Gharabeghian holds a B.S. in Mechanical Engineering and M.S. in Energy, Resources, and Environment. 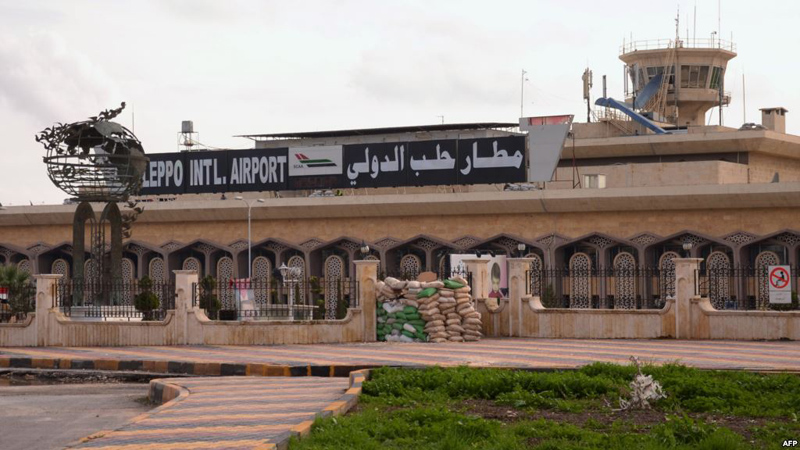 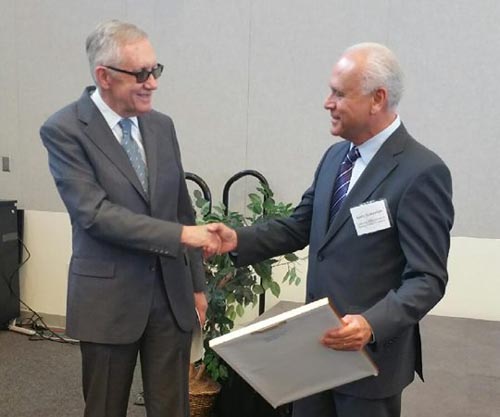 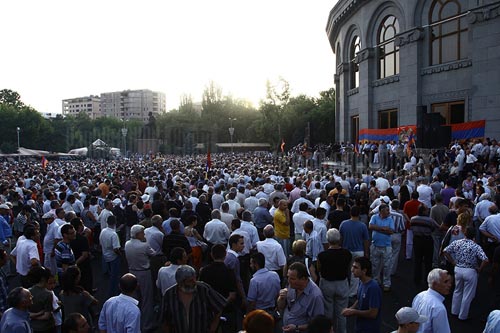 YEREVAN — Authorities in the Armenian capital have not approved at short…