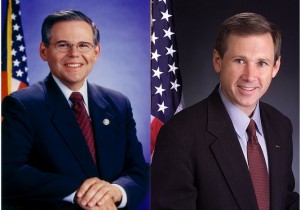 WASHINGTON, DC — Senator Robert Menendez (D-NJ), a long-time champion of Armenian issues and powerful voice for justice, along with Senator Mark Kirk (R-IL), who previously served as Co-Chair of the Armenian Caucus during his tenure in the House of Representatives (House), urged their colleagues to cosponsor a new Armenian Genocide Resolution today.
The Senate Armenian Genocide Resolution, which will be officially introduced later this month, is similar to the House version, and adds a key finding from the 1951 U.S. filing before the International Court of Justice concerning the Convention on the Prevention and Punishment of the Crime of Genocide. Specifically, the document highlighted the fact that “the Roman persecution of the Christians, the Turkish massacre of Armenians, the extermination of millions of Jews and Poles by the Nazis are outstanding examples of the crime of genocide.”
The Senate action comes as Senators Scott Brown, Dianne Feinstein (D-CA), and Mark Kirk introduced legislation, S.Res.392, on the protection of religious property and minorities in Turkey. Their effort builds on last year’s successful House passage of similar legislation.