The Armenian Genocide is the extermination of Armenians in the Ottoman Empire and adjacent areas in 1915-1923. To this day, contemporary Turkey denies the fact of the Armenian Genocide, criminalizing any accusation or even a mention of the events.

On January 29, the state commission on coordination of events commemorating the Armenian Genocide unanimously adopted the Pan-Armenian Declaration on the Genocide Centennial, with Armenian President Serzh Sarkisian later publicizing it in Tsitsernakaberd [the Armenian Genocide memorial]. The multilingual website http://ArmenianGenocide100.org, created by the decision of the Armenian Genocide centennial committee was launched that exact day.

The website has more than 20 sections, presenting the text of the Pan-Armenian Declaration in eight languages, as well as chronology of the Genocide, overview of monuments destroyed as a result of cultural genocide, testimonies and stories.

The section Tell Your Story invites descendants of the Genocide survivors to tell their families’ stories.  Along with the sections featuring states, local governmental bodies and international organizations that have recognized the Armenian Genocide, the interactive section Petition is operating where each individual can join the petition for recognition of the Armenian Genocide and call on the authorities of their respective countries to recognize the 1915 events.

Along with the actively operating newsfeed, the section This Day 100 Years Ago is also updated on a regular basis, containing publications by Armenian and foreign newspapers on the Genocide, dating back to 1915.

Facts in numbers, as well as statements by prominent diplomats, heads of states and scientists are represented on the website. There is an archive of video and photo footage in the section Library, containing factual proof of the Armenian Genocide, massacres and ethnic cleansing masterminded by Turks. The section Exhibitions contains materials on the Genocide, providing enough materials for photo exhibits throughout the globe that will contribute to the thorough presentation of the subject to Armenian and international audiences, also serving educational purposes.

ArmenianGenocide100.org was created on the threshold of the Armenian Genocide centennial to commemorate the tragedy, raise awareness of the crime against humanity and prevent future genocides. 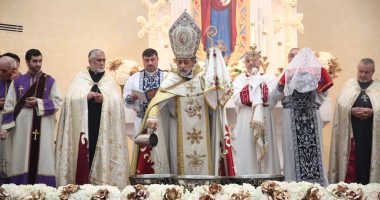 BY TALEEN BABAYAN BURBANK — Echoing thousands of years of religious and…