In September 2013, AGBU Bibliothèque Nubar published the first issue of Études arméniennes contemporaines, an academic and multidisciplinary journal that examines current issues facing Armenians both in Armenia and in the diaspora. Published in French and English, the journal examines political, historical, cultural and geographical challenges in Armenia, the Caucasus, Turkey and the Middle East. With special themed issues, it also seeks to explore broader subjects involving international relations, nationalism, migrations, diaspora, heritage, memory and mass violence.

As part of the revues.org database, Études arméniennes contemporaines joins web-based versions of more than 400 humanities and social science journals in French and other languages. This editorial evolution enables the journal to contribute more substantively to the field of Armenian studies, which lacks an academic journal specifically dedicated to the modern and contemporary periods.

The biannual journal replaces Revue arménienne des questions contemporaines, which published 15 issues between 2004 and 2012. The new name and look of the journal is intended to rebrand the magazine as more academic. To this end, a new editorial committee has been appointed to meet regularly and define the content of the journal. The committee is advised by an international team of researchers, including Sebouh David Aslanian, Raymond Kévorkian, Vincent Duclert, Vahé Tachjian, Taner Akçam, Yves Ternon, Bernard Heyberger, Uður Ümit Üngör, Béatrice Giblin, Sévane Garibian, Hamit Bozarslan and Michel Bruneau.

“As part of its mandate to inform and educate, Études arméniennes contemporaines will continue to engage the general public to foster as broad a readership as possible—not just those within the academic community. This is to promote a better understanding of the themes the journal seeks to explore in each issue,” says Boris Adjemian, the director of AGBU Bibliothèque Nubar.

The first issues of the journal are comprised of original research, including Taline Papazian’s study on political sovereignty in the South Caucasus in the twentieth century, Emmanuel Naquet’s article on the mobilization of intellectuals during the Dreyfus Affair in support of the Armenian cause and Laurence De Cock’s analysis of the inclusion of the Armenian genocide in the French secondary school curriculum.

The third issue, under the direction of Taline Papazian, was devoted to comparing Jewish and Armenian experiences of statehood and nationhood in the twentieth century. It included interviews with Israeli historian Shlomo Sand and diaspora specialist Khachig Tölölyan. The fourth issue, currently in press, is comprised of an article by Vazken Khachig Davidian that reinterprets Armenian and Turkish historiographies of Ottoman arts and an essay by Sebouh David Aslanian that argues for the necessity to study Armenian history in the broader perspective of world history, among many others.

The fifth issue of the journal, under the direction of Alexandra Garbarini and Boris Adjemian, will be released in June 2015. Composed of articles from several fields of study, the issue will focus on the theme victim testimony and understanding mass violence. 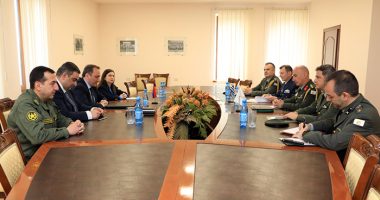