LISBON — The first ever Armenian Culture Week (12-19 October 2014) at the Calouste Gulbenkian Foundation generated much excitement and interest in Lisbon. Sixteen events took place in eight days, including concerts, lectures, seminars and exhibitions. 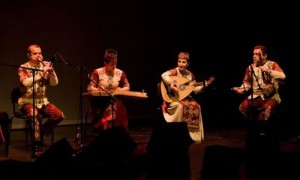 “It was an intense week,” said Razmik Panossian, the Director of the Armenian Communities Department, “as we brought to Portugal various aspects of Armenia culture and history. I was truly and pleasantly surprised at the great interest the Week generated among the general public and among my colleagues at the Foundation.”

Music
Five concerts highlighted traditional and classical Armenian music as the sound of the duduk and other Armenian instruments filled the packed the 1000-seat Grand Auditorium on several occasions.

Shoghaken Ensemble’s Road to Armenia concert kicked off the Week on October 12. Founded in 1995, the Ensemble interprets songs and melodies, playing them on traditional instruments. The results “are stunning in their drive, beauty and mystery” according to the Boston Herald.

On Tuesday night, the 14th of October, a free Armenian chamber music concert was given by Gulbenkian Orchestra soloists and their guests, performing pieces by Arno Babajanian, Tigran Mansurian and of course Komitas. The audience was captivated by the delicate music and the voice of soprano Manuela Moniz whose repertoire included the classic song of longing, “Krunk.”

Thursday and Friday nights the full Orchestra, conducted by Pedro Neves, played Armenian and Portuguese composers as part of its regular series: Luís de Freitas Branco and Aram Khachaturian, including the famous Suite no. 3 from Gayane. Nareh Arghamanyan, the invited piano soloist, enchanted the audience with her spirited interpretation of Khachaturian. Friday’s main concert was followed by another Armenian chamber music concert, playing compositions by Harutiun Dellalian, Karen Khachaturian and Vache Sharafyan.

The music series was closed on Sunday 19 October by the Jordi Savall’s wonderful “Spirit of Armenia” sold-out concert. His ensemble, including invited musicians from Armenia produced an enthralling musical experience.

Roundtables, Lectures and Book Launch
Three public events provided much needed information about the Founder and his culture on Wednesday 15 October.

The roundtable “More than Mr. 5%: The Early Life of Calouste Gulbenkian” focused on the Founder’s early life and his inspiring example still relevant to us. The President of the Foundation, Artur Santos Silva, opened the proceedings. The Director of the Library and Archives, Ana Paula Gordo, brought the archives to life by highlighting some of the hidden treasures it contains, including letters from a very young Gulbenkian to his father. Jonathan Conlin, the biographer of Calouste Gulbenkian, presented some of the early findings of his research, leaving the audience eager for the publication of his book. Finally, Martin Essayan, Gulbenkian’s great-grandson and Trustee, delivered an inspiring speech aimed largely at the employees of the Foundation. Openness, cooperation and effectiveness were key words throughout his discourse. The roundtable was moderated by Razmik Panossian.

The Portuguese version of Vassili Grossman’s book, An Armenian Sketchbook, was launched on Wednesday as well. Published by Don Quixote, it appears under the title Bem Hajam! Apontamentos de Viagem à Arménia. Filipe Guerra, one of the two translators of the book explained the context of the book and Grossman’s visit to Armenia in the early 1960s. 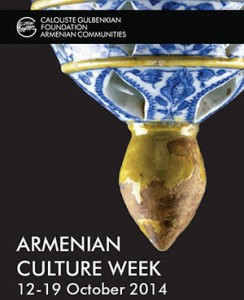 The formal opening of the “Networks of Circulation and Exchange: Armenian, Portuguese, Jewish and Muslim Communities from the Mediterranean to the South China Seas” conference took place on Wednesday evening. Once again, the President of the Foundation formally opened it, emphasizing the spirit of cooperation and collaboration, as well as the parallels between Armenian and Portuguese history. The keynote speaker, Professor Sebouh Aslanian, a historian from UCLA, gave a fascinating account of Armenian merchants and their international networks in the 17th and 18th centuries. The conference continued on Thursday and Friday.

Another roundtable, attended by nearly 80 people, was on the topic of “Armenian Music: Past and Present.” Moderated by Rui Vieira Nery, the Director of the Portuguese Language and Culture Programme, it was not only an informative but also an emotional event. Marina Dellayan, a Portugal-based pianist, explained the history of Armenian music and gave an overview of Armenian culture, while musician Gevorg Dabaghyan introduced the “most Armenian instrument,” the duduk, and graced the audience with a private concert of three pieces, including Komitas’s “Dle-Yaman.”

Jordi Savall too had gracefully agreed to take part in another roundtable on Armenian music prior to his concert. Answering questions posed by the moderator, Risto Nieminen, the Director of the Music Department, Savall emphasized the healing power of music and how resilient people like the Armenians have produced culture in – and in response too – adverse conditions, violence and exile.

At the Modern Art Centre of the Foundation, Professor Kim Theriault delivered a fascinating lecture about the life and art of one of the most important American artists of the 20th century, “Towards the abstract: the imaginary and imagination of Arshile Gorky.” She discussed Gorky’s development as an artist, his work and his impact on modern art. Gorky created, she argued, a unique abstract art that was a bridge between European Surrealism and American Abstract Expressionism, and that ultimately it was a visual manifestation of his displacement as an artist of Armenian origin.

Film Premiere
The Grand Auditorium was once again full for the premiere of the documentary film “ARtMENIA,” directed by Ricardo Espírito Santo (Terra Líquida Films), in collaboration with Helena Araújo. The movie artfully introduced Armenian history, culture and traditions to the Portuguese audience, weaving it through the music of Tigran Mansurian.

Seminars
During the week, two two-day international seminars were hosted by the Foundation. The first, on Monday and Tuesday, brought together 35 leaders and prominent thinkers in the Armenian world to discuss strategies for the future. Under the rubric of “Armenians at 2115,” the invitation only seminar was a seminal step in fostering long term planning and strategic visioning. A separate communique will soon be issued on this event, followed by a seminar report.

The second two-day seminar, continuing from the keynote address of Wednesday evening, was an academic gathering on the topic of “trade networks.” Some 40 international experts focused on the use of commodities and paper instruments in the early modern period. Some of the top experts in the field were present, along with younger colleagues researching the topic. Comparisons were drawn between Armenian, Portuguese and other trade networks. The papers will be published as a book.

The other exhibition, Arshile Gorky and the Collection is at the Foundation’s Modern Art Centre, and runs until 31 May 2015. It focusses on Gorky’s surrealist work “in conversation” with other modernists of his period, including prominent Portuguese artists.

Martin Essayan, Trustee of the Foundation summed up the Week: “It was touching to see and hear the culture of our Founder resonate in the Foundation. The collaborative spirit in which Armenian Culture Week was planned and executed is exemplary. The Armenian Communities Department reached out to various other parts of the Foundation – from the Presidency to Communications, from the Music Department to the Museum, CAM, the Archives, and the Programme of Portuguese Language and Culture. The success of the week was contingent upon such collaboration. Indeed, it was a wonderful week celebrating Armenian culture at one of the premier foundations in Europe headquartered in Lisbon.” 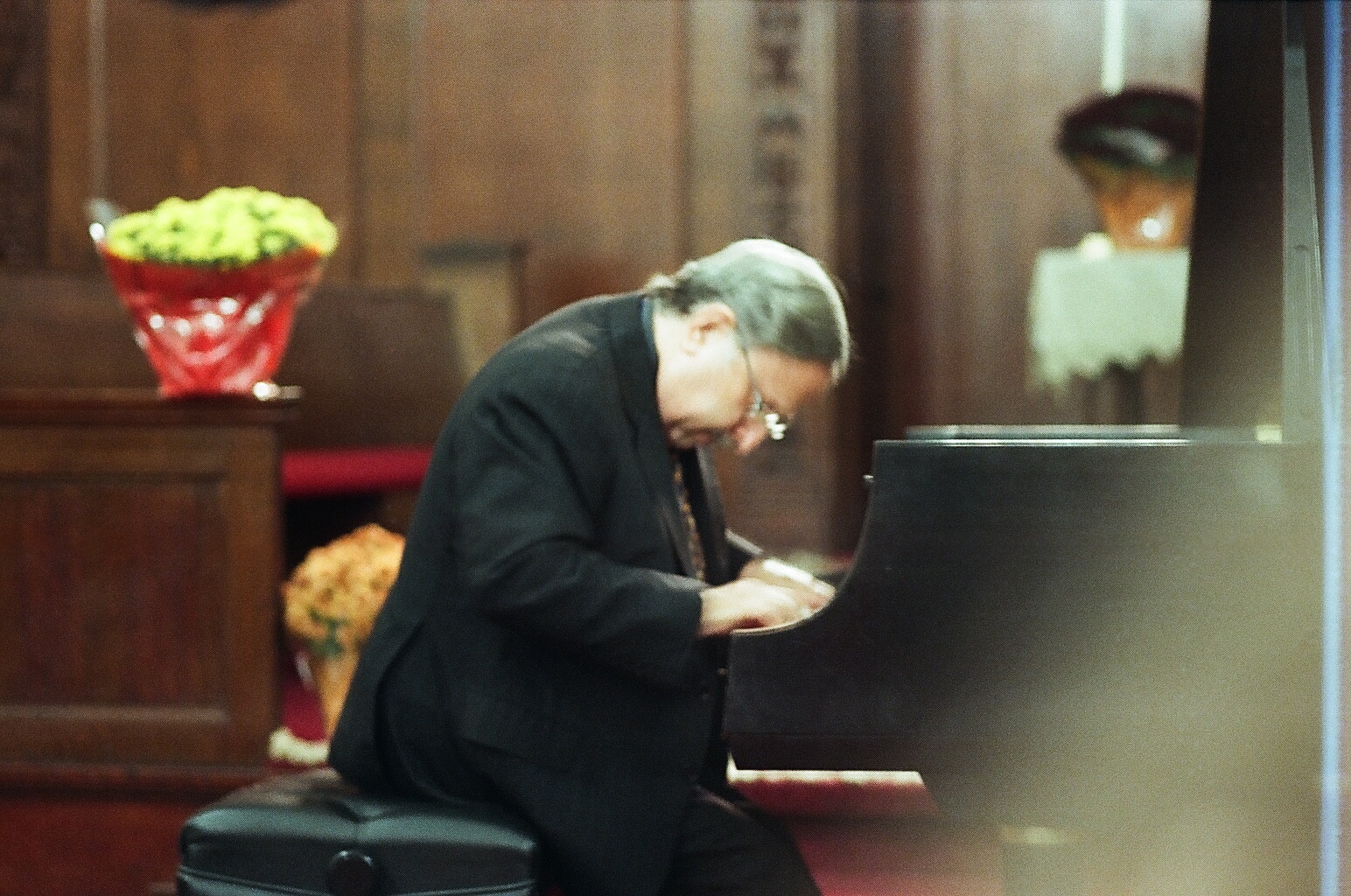 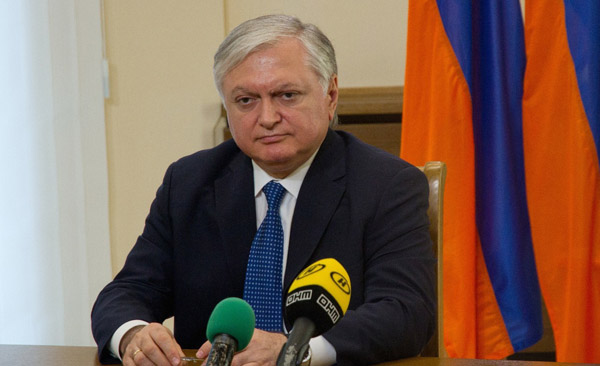 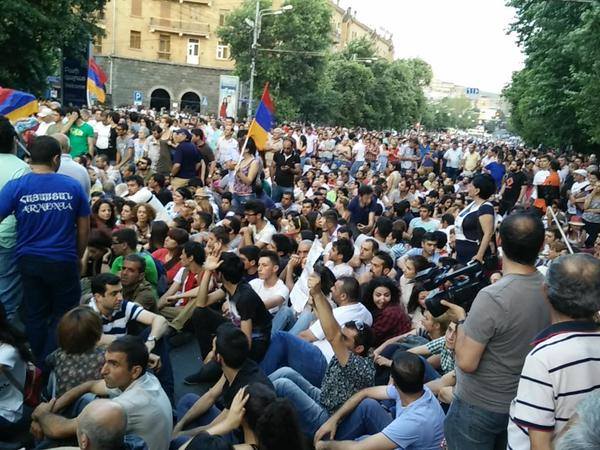