Armenia and Azerbaijan Fail to Reach Agreements on Most Important Issues in Brussels. PM Pashinyan

VLADIVOSTOK — Prime Minister Nikol Pashinyan has confirmed that he and Azerbaijani President Ilham Aliyev failed to reach agreements on key issues on their agenda at their last meeting in Brussels hosted by the European Union’s top official.

“I must say that during that meeting we did not manage to register common positions on the most important issues preoccupying us,” Pashinyan told members of the Armenian community in the far eastern Russian city of Vladivostok late on Wednesday. “We are talking, in particular, about the Karabakh problem. Azerbaijan believes that the Nagorno Karabakh conflict is resolved and that there is nothing left to be discussed. Our position and clearly the position of the international community don’t match with Azerbaijan’s position. It is obvious that particularly Russia doesn’t share that position. During my official visit to Russia the President of Russia and I signed a statement which recorded that we must cooperate in the direction of solving the Nagorno Karabakh conflict. Meaning, Russia is recording that there is a conflict which must be resolved. And this is logical because if there was no conflict the Russian peacekeeping forces wouldn’t be deployed in Nagorno Karabakh now.” 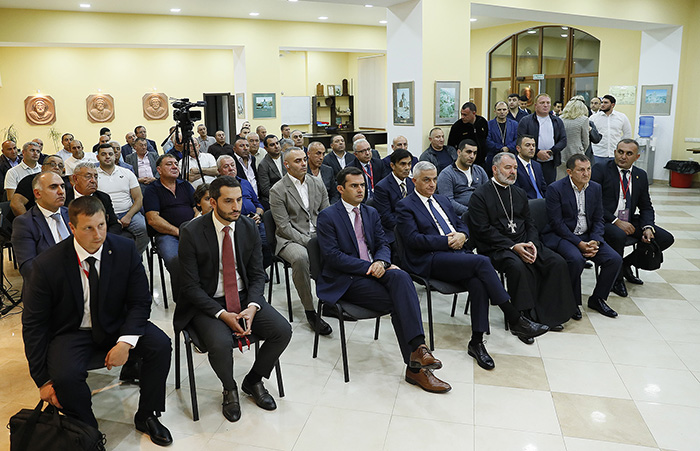 Speaking about land corridor Pashinyan said. “The opening of the road doesn’t create any danger for Armenia and Syunik province, on the contrary it will bring additional security and stability guarantees, it is another matter that sometimes there are expressions in the Azerbaijani narrative which reveal some dangers. For example, they speak about a corridor. I want this to be very clear: we will not give any corridor to anyone through the territory of Armenia. But we will give a road, we will open the road, and we are ready to do it at any moment. We’ve also conveyed proposals, as soon as Azerbaijan accepts these proposals we can sign a concrete document based on these proposals and very quickly implement these agreement. I assure you this doesn’t create any dangers”.

The PM added that today the entire Armenian economy depends on the Upper Lars road, and today this road is more overloaded because due to the situation in Ukraine a part of shipments which were previously carried out through the Black Sea are now done through this section.

He said that he wants the regional connections to be opened and that it isn’t impossible.

FRESNO — Dr. Suren Manukyan will speak on “Architects of the Armenian…