Addressing the large audience was Deacon Allan Y. Jendian, Publicity Chair of ACC, who delivered the opening remarks and gave a brief introduction on the traditional Armenian political parties and the cultural, educational and political action organizations that function under their auspices.

Sevak Khatchadorian, Chairman of ACA, discussed the mission of ACA, that includes bridging the gap between elected US officials and the Armenian American communities in the United States, strengthening U.S. – Armenia and U.S. – Artsakh ties and promoting good governance in Armenia. Mr. Khatchadorian then introduced Dr. Sarafian.

Dr. Sarafian delivered an intellectual and thought provoking presentation about Armenia by highlighting the major events since the independence in 1991 that resulted in subversion of the rule of law and erosion of checks and balances between the three branches of government, which in turn led to institutionalized corruption that pilfered the state coffers, regime sponsored monopolies, class of untouchables who were above the law and the establishment of perpetual fraudulent elections that enabled the leading Republican Party to further strengthen its grip on all aspects of life in Armenia getting very close to establishing a single party rule, much like the communist party in Soviet times.

Speaking about the major achievements of the “Velvet Revolution” thus far, the speaker singled out the relentless war against corruption by Nikol Pashinian’s government that has so far ensnared prominent figures of the previous Republican Party-led regime with more revelations to come, re-establishment of judicial independence and a concerted effort toward more transparent and just governance.

He later drew a contrast to neighboring Georgia, which prior to the Saakashvili-led “Rose Revolution,“ was considered to be one of the most corrupt countries in the region and now has become a thriving democracy. Dr. Sarafian felt confident that the new leadership under Prime Minister Nikol Pashinian will spearhead the same type of change in Armenia. He ended his speech by stating that he was optimistic about the future because Armenia’s youth, the driving force behind this movement, is fully engaged in the process, is fully aware of its rights; and in the age of advanced technology and the internet, they have a good grasp of how a modern democracy is supposed to function.

The lecture was followed by a lively question and answer session where members of the audience asked and received answers to wide ranging and in-depth questions about the topic at hand. 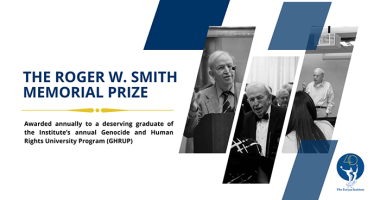