PARIS — France will continue to maintain warm relations with Armenia and support it in the international arena, French President Emmanuel Macron said after holding talks with his Armenian counterpart Serzh Sarkisian in Paris on Tuesday.

Macron also described as “encouraging” recent Armenian-Azerbaijani peace talks and urged the parties to the Nagorno-Karabakh conflict to “go farther” in trying to resolve it.

“France will always be alongside Armenia,” he said in a statement to the press made at the presidential Elysee Palace.

“France will accompany you in a troubled regional environment so that your country can conquer its future as it has always done in its history,” he added.

Macron cited “profound links” between the two nations cemented by the existence of a sizable and influential Armenian community in France. “I am also aware of the fight by the Armenian Diaspora in France for the memory of the [1915] genocide and I have deepest respect for this fight,” he said.

Macron was endorsed by leading French-Armenian organizations ahead of a second round of voting in France’s April-May 2017 presidential election. Four ethnic Armenians were subsequently elected to the French parliament on the ticket of his Republic on the Move party.

Macron announced after the talks with Sarkisian that he will travel to Armenia in October on a state visit timed to coincide with a summit in Yerevan of Francophonie, a grouping of over 70 mainly French-speaking nations. He expressed hope that the summit will give “new impetus” to the spread of the French language in Armenia.

The 40-year-old French leader also stressed the “necessity to impart more dynamism to our economic cooperation.” He said he specifically discussed with Sarkisian ways of boosting French investments in the Armenian economy. “I am thinking of sectors such as tourism, renewable energy, agriculture, logistics and retail,” he said.

For his part, Sarkisian reaffirmed his administration’s commitment to deepen Armenia’s “privileged” relationship with France. “We sincerely love and respect France and its talented people,” he declared at the joint news briefing.

“We have practically identical views on all vital issues … I mean both the bilateral and international agenda. We espouse the same principles and are guided by the same value system,” he said.

Sarkisian went on to thank France for helping Armenia negotiate and sign in November the Comprehensive and Enhanced Partnership Agreement (CEPA) with the European Union. In Macron’s words, the landmark agreement reflects a “special formula” for Armenia-EU ties that was advocated by the French government.

The unresolved Karabakh conflict also apparently featured large during the first-ever meeting of the two presidents. France has been spearheading, together with the United States and Russia, international efforts to broker an Armenian-Azerbaijani peace accord.

Macron said that a long-awaited peaceful resolution of the conflict requires “courageous decisions and compromises” by both conflicting sides. In that regard, he hailed progress reportedly made during Sarkisian’s October 2017 meeting with Azerbaijan’s President Ilham Aliyev and follow-up talks between the Armenian and Azerbaijani foreign ministers.

“We know how fragile the process still is and how volatile the situation on the ground often is,” said Macron. “It is therefore absolutely essential that this renewed dialogue leads to concrete progress.”

“We will continue to closely monitor this situation and we will take, in concert with our Russian and American partners, any initiative that could advance the settlement process,” he added. 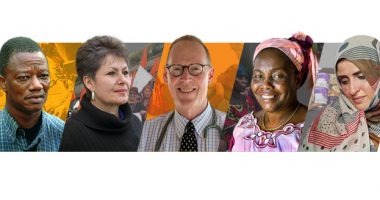 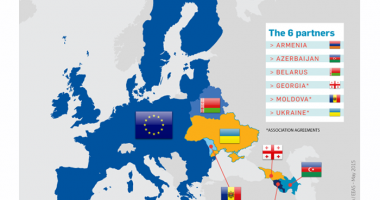