SACRAMENTO — California Governor Jerry Brown signed the 2017-2018 state budget on Tuesday with $3 million earmarked for the Armenian American Museum. The new funding will be dispersed over the next 3 years at $1 million per year. The approval brings the State’s total funding commitment for the Museum to $4 million.

“We are proud to stand shoulder to shoulder with our State of California leaders to build a historic cultural and educational center that will honor the rich history and celebrate the diverse cultures who call our great state home,” stated Museum Governing Board Co-Chair Archbishop Moushegh Mardirossian.

“We would like to express our special thanks to Senator Anthony J. Portantino, Senate Pro Tem Kevin de León, and Budget Subcommittee Chair Richard Roth for leading the efforts to prioritize the funding in the 2017-2018 state budget,” stated Museum Governing Board Co-Chair Archbishop Hovnan Derderian.

The $3 million funding request was initiated in the State Senate by Senator Anthony J. Portantino with the support of Senate Pro Tem Kevin de León and Budget Subcommittee Chair Richard Roth. Upon the approval by the Senate Budget Subcommittee and Budget Conference Committee, the new funding for the Armenian American Museum was included in the 2017-2018 state budget proposal approved by the State Legislature on June 15.

“There is a long history of California supporting laudable museum projects around the state,” stated Senator Anthony J. Portantino. “I wanted to make sure that the Armenian American Museum garners equal and fair support.”

“It was an honor to work with my colleagues in the California legislature to secure $3 million dollars in funding for the Armenian American Museum,” stated Senate Pro Tem Kevin de León. “I am proud to stand in solidarity with the Armenian community.”

“The Armenian American Museum in Glendale has the potential to serve as a beacon of hope for countless visitors through its work to embrace our diversity, educate, and empower all who step through its doors,” wrote Assemblymember Laura Friedman in a letter in March urging the Governor to reinstate the $1 million for the Museum. Friedman’s support for building the Museum in Glendale began as a Glendale City Councilmember and she has continued to advocate for the project in the State Assembly as one of her top priorities.

“The State of California’s investment in the Armenian American Museum lays the foundation for a momentous project that will serve generations to come,” stated Museum Governing Board Co-Chair Bishop Mikael Mouradian.

Museum officials continue to work closely with the City of Glendale on developing the project’s concept design, traffic, parking, economic, and environmental studies in preparation for the upcoming ground lease agreement consideration by the Glendale City Council.

“We are looking forward to working with our City of Glendale partners to build an iconic center in the heart of Glendale’s Arts and Entertainment District,” stated Museum Governing Board Co-Chair Reverend Berdj Djambazian.

The Museum’s concept design by Alajajian Marcoosi Architects for the proposed downtown Glendale site was unveiled in December 2016. The concept design’s animated video tour can be viewed at www.ArmenianAmericanMuseum.org. 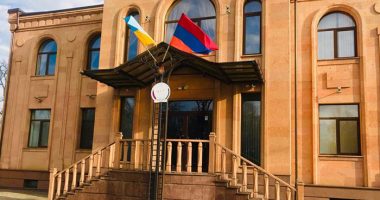