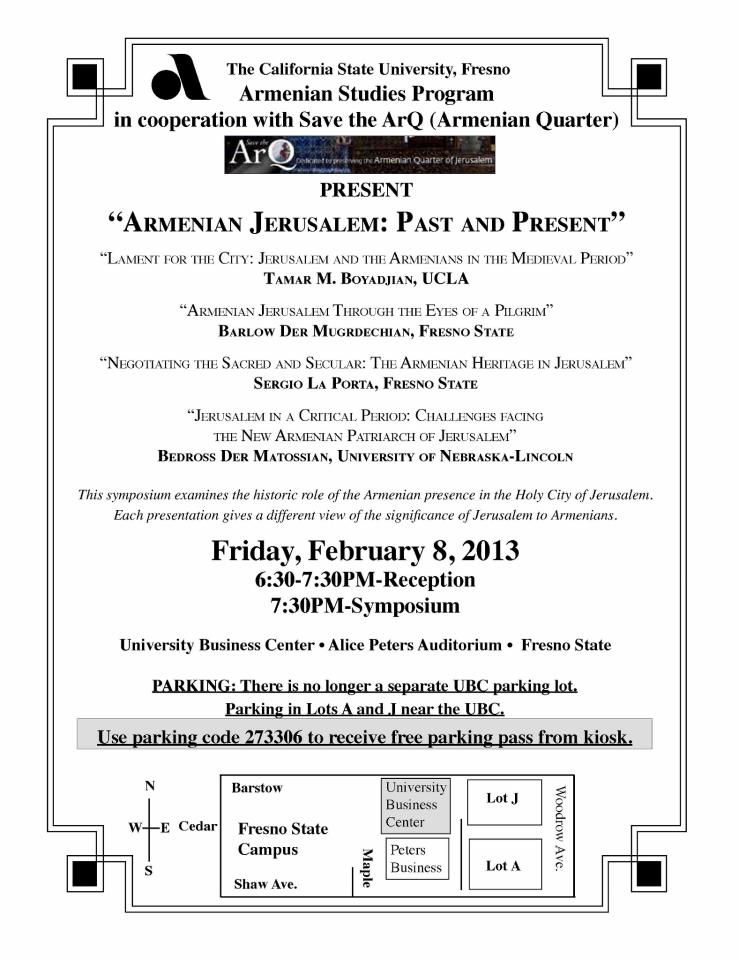 FRESNO — A symposium, “Armenian Jerusalem: Past and Present,” organized by the Armenian Studies Program at Fresno State, in cooperation with Save the ArQ, will be held at 7:30 PM on Friday, February 8, 2013. The symposium will be held in the University Business Center, Alice Peters Auditorium, Room 191, on the Fresno State campus and is part of the Armenian Studies Program Spring 2013 Lecture Series. A hors d’oeuvres reception will be held from 6:30-7:30PM in the gallery next to the Auditorium. The lecture is funded in part by the Leon S. Peters Foundation.
Save the ArQ is a 501(c)3 organization dedicated to preserving the Armenian Quarter of Jerusalem. The non-profit organization aims to create awareness of the significant religious, cultural, and historical presence of Armenians in Jerusalem and to encourage the revitalization of the Armenian Quarter in the Old City. The Armenian Quarter encompasses 1/6 of the Old City which the Armenians have inhabited since the 4th century.
Four papers will present various facets on the Holy City of Jerusalem, a place of great significance in Armenian history. Each of the papers focuses on an interesting aspect of the city, and the Armenian Patriarchate of Jerusalem.
Tamar Boyadjian (UCLA) will present a paper on “Lament for the City: Jerusalem and the Armenians in the Medieval Period.” Her talk will discuss the relationship between the Armenians and the city of Jerusalem in the Middle Ages, focusing primarily on the period most commonly referred to as the early crusades, 1095-1191 A.D. Among the questions she will explore are: What was the Armenian presence in crusader Jerusalem, and what were the attitudes of the Armenians towards the European crusaders? What role did the Armenians of Jerusalem and surrounding principalities play in the crusades?
Barlow Der Mugrdechian (California State University, Fresno) will present a paper on “Armenian Jerusalem Through the Eyes of a Pilgrim.” His paper will be based on his personal experiences as a traveler to Jerusalem, since 1985. Why has Jerusalem occupied such an important space in the consciousness of Armenians? What has continued to attract Armenian pilgrims to visit Jerusalem?
Sergio La Porta (California State University, Fresno) will present “Negotiating the Sacred and the Secular: The Armenian Heritage in Jerusalem.” The Armenian presence in Jerusalem stretches back over hundreds of years. While much of the connection between Armenians and Jerusalem has been and continues to be religious in nature, and more specifically related to pilgrimage, there has also been a strong and significant secular dimension to Armenians in Jerusalem. His talk will highlight how the sacred and secular coexist in this unique environment.
Bedross Der Matossian (University of Nebraska-Lincoln) will present “Jerusalem in a Critical Period: Challenges Facing the New Armenian Patriarch of Jerusalem.” The Armenian Patriarchate of Jerusalem is one of the most important spiritual, cultural, and national centers for the Armenians around the globe and has faced enormous challenges in the course of its more than 1700 year history and has been able to overcome many types of adversities. However, the challenges in the 21st century have taken a new shape. The talk will identify the challenges facing the Patriarchate, the newly elected Armenian Patriarch, and the community, and will suggest pragmatic remedies to political, religious, social, and economic challenges and discuss the ways in which the Diaspora can bring its share in assisting the Patriarchate and the community.
The lecture is free and open to the public.
For more information on the lecture please contact the Armenian Studies Program at 278-2669. 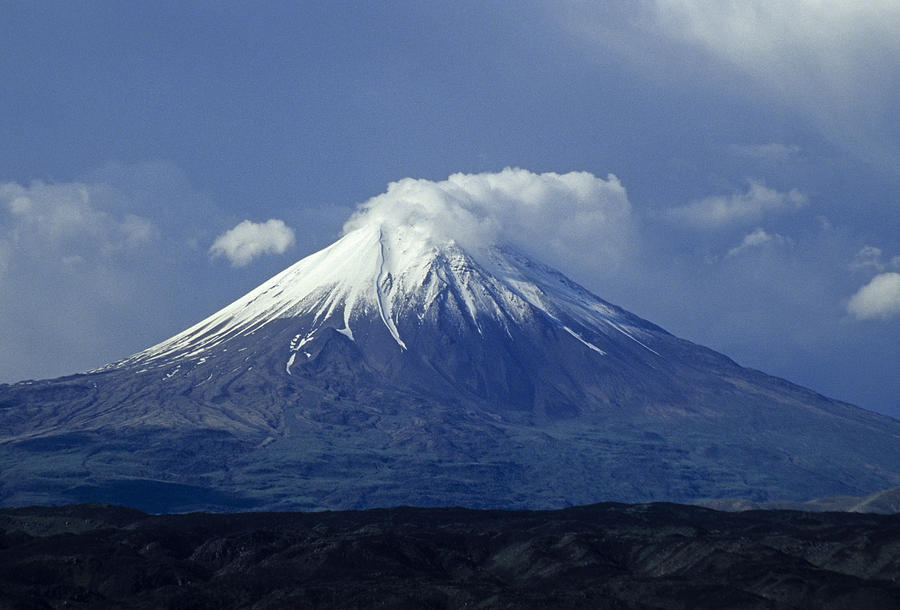 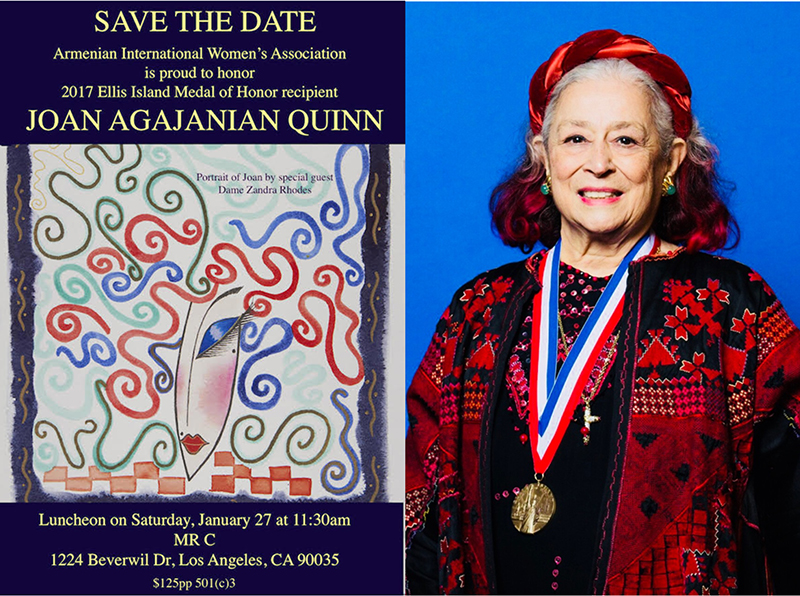 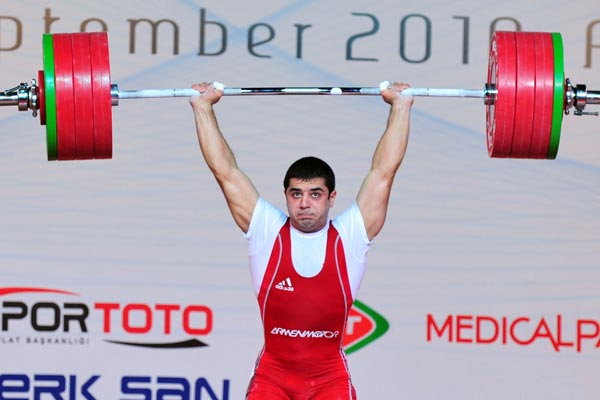 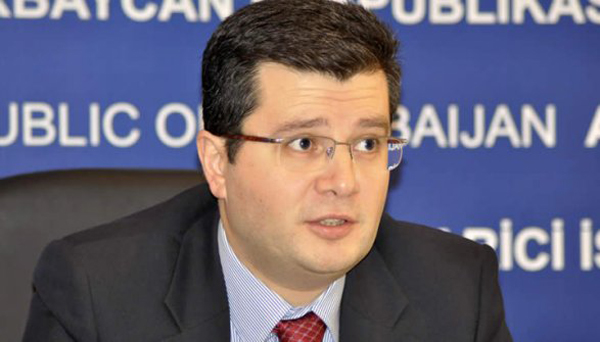