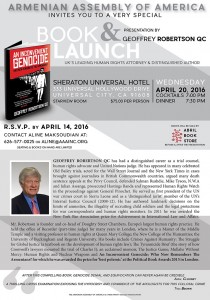 LOS ANGELES, CA – On Wednesday, April 20, the Armenian Assembly of America (Assembly) will host a presentation by the United Kingdom’s leading human rights attorney and author Geoffrey Robertson QC about his book titled An Inconvenient Genocide: Who Now Remembers the Armenians?

Robertson’s book proves beyond reasonable doubt that the horrific events in the Ottoman Empire in 1915 constitute the crime against humanity that is today known as genocide. He explains how democracies can deal with genocide denial without infringing on free speech. His writings are a major contribution to understanding and preventing these crimes. An Inconvenient Genocide: Who Now Remembers the Armenians? was awarded the prize for “Best Polemic” at the Political Book Awards 2015 in London.

Robertson has had a distinguished career as a trial counsel, human rights advocate, and United Nations (UN) judge. He has appeared in many celebrated Old Bailey trials; acted for the Wall Street Journal and the New York Times in cases brought against journalists in British Commonwealth countries; argued many death sentence appeals at the Privy Council; defended Salman Rushdie, Mike Tyson, rap group N.W.A, and Julian Assange; prosecuted Hastings Banda; and represented Human Rights Watch in the proceedings against Chilean General Augusto Pinochet. He served as the first president of the UN War Crimes Court in Sierra Leone and as a ‘distinguished jurist’ member of the UN’s Internal Justice Council (2008-12). He has authored landmark decisions on the limits of amnesties, the illegality of recruiting child soldiers, and the legal protections for war correspondents and human rights monitors. In 2011, he was awarded the New York Bar Association prize for Achievement in International Law and Affairs.

Known for his representation of the Republic of Armenia as a third party, Robertson was an attorney in the Perincek v. Switzerland Armenian Genocide denial case with the European Court of Human Rights (ECHR), alongside Amal Alamuddin Clooney.

Robertson is founder and co-head of Doughty Street Chambers, Europe’s largest human rights practice. He held the office of Recorder (part-time judge) for many years in London, where he is a Master of the Middle Temple and visiting professor in human rights at Queen Mary College, the New College of the Humanities, and the University of Buckingham and Regents University. His books include Crimes Against Humanity: The Struggle for Global Justice, a textbook on the development of human rights law; The Tyrannicide Brief, the story of how Cromwell’s lawyers mounted the trial of Charles I; an acclaimed memoir, The Justice Game; Mullahs Without Mercy: Human Rights and Nuclear Weapons; along with An Inconvenient Genocide: Who Now Remembers The Armenians?

This special book presentation will take place at the Sheraton Universal Hotel in Universal City, CA, beginning with cocktails at 7:00 PM and dinner at 7:30 PM.

An Inconvenient Genocide: Who Now Remembers the Armenians? books will be available at the event and sold by Abril Book Store. A book signing will take place after the presentation.

To RSVP, contact Armenian Assembly of America Western Region Manager Aline Maksoudian by phone (626-577-0025) or email ([email protected]) by April 14, 2016. Tickets are available for purchase for $75 per person. Table purchase is available and includes 10 seats. Seating is limited and RSVP is required. 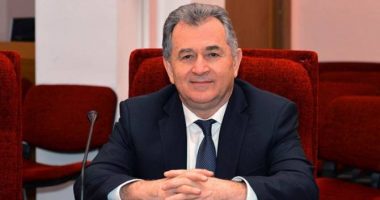