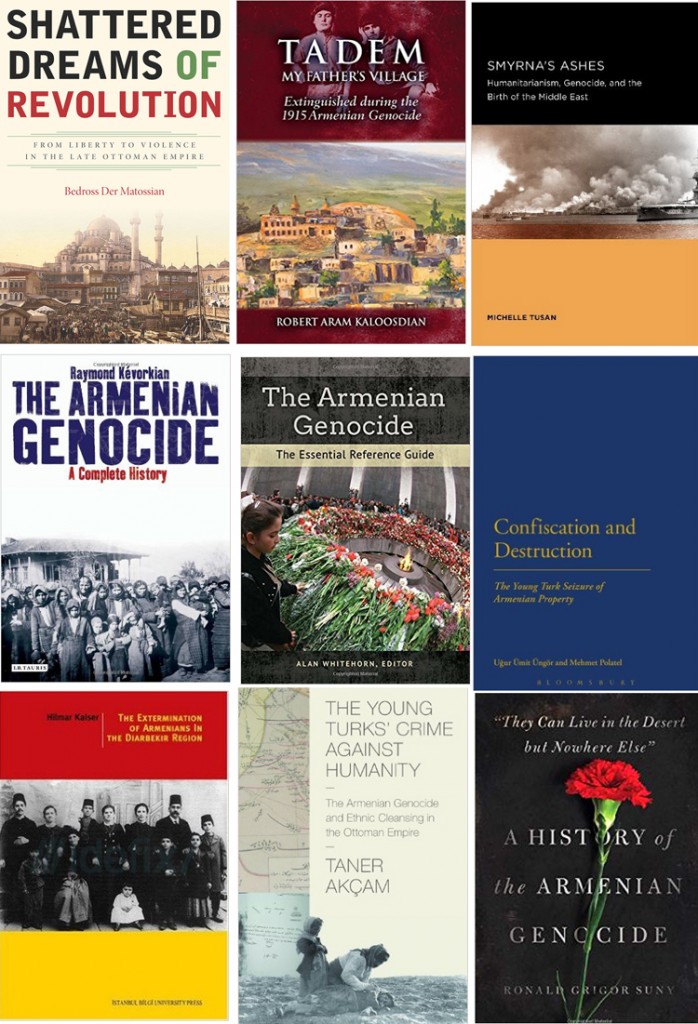 WASHINGTON, DC – A very respectable number of publications were issued in anticipation of the centennial of the Armenian Genocide, reported the Armenian National Institute (ANI). The release of memoirs, monographs, translations, albums, as well as video documentaries, photographic exhibits related to historical and contemporary facets of Armenian life, and commemorative websites have all impacted how and why the Armenian Genocide is studied.

In particular, a series of noteworthy academic works added substantially to the deepening understanding of the Armenian Genocide. A short list of scholarly publications would include Raymond Kévorkian’s The Armenian Genocide A Complete History; Hilmar Kaiser’s Extermination of Armenians in Diarbekir Region; Ugur Ümit Üngör and Mehmet Polatel’s Confiscation and Destruction: The Young Turk Seizure of Armenian Property; Taner Akçam’s The Young Turks’ Crimes Against Humanity: The Armenian Genocide and Ethnic Cleansing in the Ottoman Empire; Bedross Der Matossian’s Shattered Dreams of Revolution: From Liberty to Violence in the Late Ottoman Empire; Michelle Tusan’s Smyrna’s Ashes: Humanitarianism, Genocides, and the Birth of the Middle East; and Ronald Grigory Grigor Suny’s “They Can Live in the Desert but Nowhere Else:” A History of the Armenian Genocide.

This year, an important reference work also became available with The Armenian Genocide: The Essential Reference Guide, Alan Whitehorn Ph.D., editor, issued by ABC-CLIO. Literally covering topics from A to Z, the single volume reference includes 156 entries authored by 40 contributors, providing a comprehensive summary of the state of scholarship on the Armenian Genocide. Four maps and many primary source documents make the publication a single volume encyclopedia addressing all the major topics explored by ongoing academic research on the Armenian Genocide.

With numerous entries authored by the editor, some several pages long, Whitehorn also acknowledges the contributions and support of many fellow scholars including Steven Leonard Jacobs, Richard Hovannisian, Vartan Matiossian, Rouben Paul Adalian, Roger Smith, George Shirinian, Taner Akçam, Vahakn Dadrian, and Hayk Demoyan in his capacity as Director of the Armenian Genocide Museum-Institute in Yerevan. He also makes special mention of the Zoryan Institute’s Genocide and Human Rights University Program through whose sessions Whitehorn was introduced to several of the contributors.

As part of a series of reference works on human rights, crimes against humanity and genocide issued by the publishing house ABC-CLIO, T he Armenian Genocide: The Essential Reference Guide also benefits from earlier publications including the 2-volume Atrocities, Massacres, and War Crimes: An Encyclopedia by Alexander Mikaberidze, Editor; the 4-volume Modern Genocide: The Definitive Resource and Document Collection by Paul R. Batrop and Steven Leonard Jacobs, Editors, whose Volume I include a substantial section on the Armenian Genocide; and the very first of the series pioneered under the editorship of Israel W. Charny, Encyclopedia of Genocide, issued in 2000.

Whitehorn’s The Armenian Genocide: The Essential Reference Guide also includes an entry on the Armenian National Institute, while several articles by ANI Director Dr. Rouben Adalian also appear in Bartrop and Jacob’s Modern Genocide and Mikaberidze’s Atrocities, Massacres, and War Crimes, with a lengthier summary article on the Armenian Genocide that was included in the Encyclopedia of Race and Racism.

Other publications in which Dr. Rouben Adalian has participated include Jay Winter’s America and the Armenian Genocide ; William Parsons and Samuel Totten’s Centuries of Genocide: Essays and Eyewitness Accounts; and he recently reviewed Akçam’s Young Turks’ Crimes Against Humanity , which appeared in the Spring 2015 issue of Genocide Studies International, titled “The Ottoman Genocides of Armenians, Assyrians, and Greeks.”

Additional works intended for popular audiences published in recent years include Michael Bobelian’s Children of Armenia: A Forgotten Genocide and the Century-Long Struggle for Justice and Garin Hovannisian’s Family of Shadows: A Century of Murder, Memory, and the Armenian American Dream.

These publications were followed by the release of a book by Robert A. Kaloosdian, ANI Board of Governors chairman emeritus, about his ancestral hometown in historic Armenia. Titled Tadem My Father’s Village: Extinguished During the 1915 Armenian Genocide, Kaloosdian’s book appeared in print with endorsements by professors Richard Hovannisian of UCLA, James Russell of Harvard, and Taner Akçam of Clark University.

“Kaloosdian has made a lasting contribution through his meticulous combination of historical sources, memoirs, and oral histories to offer a glimpse into the life and death of his father’s beloved village,” writes Dr. Hovannisian. Dr. Akçam adds: “Kaloosdian has documented the collective memory of anyone and everyone that he could reach who lived in a specific region. Taking each of these personal accounts and combining it with research that he conducted, he has developed a new form of local history. The book you hold in your hands contains the collective memory of an Armenian village called Tadem and it is a significant achievement for this reason.”

Tom Vartabedian writing in the Armenian Weekly calls it “an inspiring book” and “a rich repository of information that puts the reader right into the thrust of history, beginning with a Tadem childhood to its Educational Society, the deportation of women in this village, and the massacre of remnants,” while Dr. Russell describes it as “the ghostly echo and image of the hundreds of towns and villages devastated by the genocide…”

Aram Arkun of the Armenian Mirror-Spectator says: “Kaloosdian has proven the worthy successor of the seemingly tireless laborers who compiled several hundred Ottoman Armenian village or city histories after the genocide in an effort to record their lost worlds.” Dr. Hilmar Kaiser adds: “this micro-history of the Armenian Genocide closes a critical gap in our knowledge. This very readable account offers important new information and insights…In sum, it is mandatory reading for all scholars and students of the Armenian Genocide.”

More information at “Education” section of the ANI website ( www.armenian-genocide.org ). 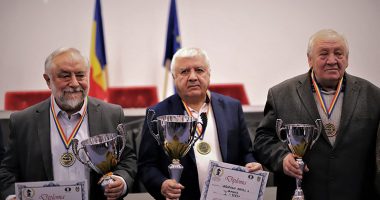 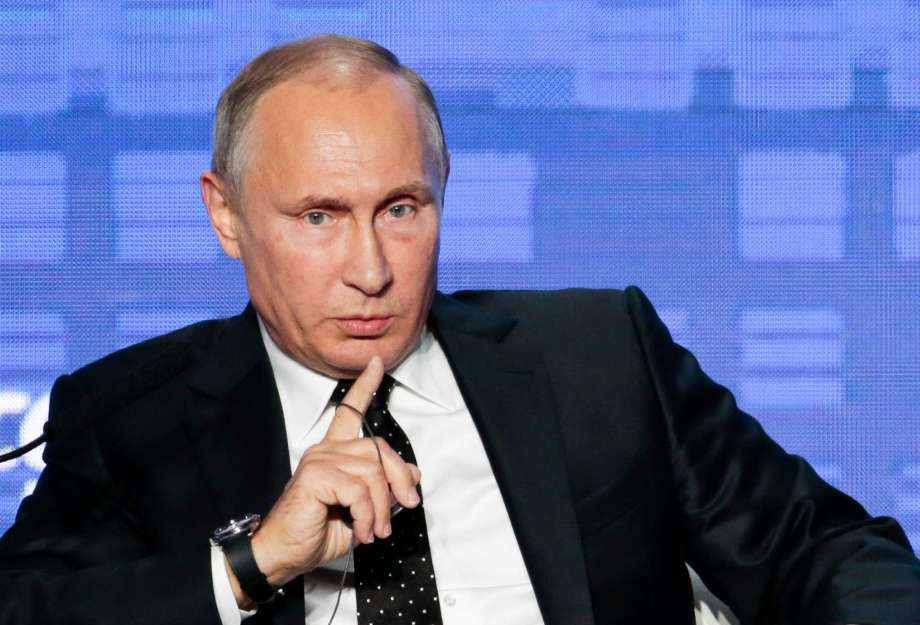