An Armenian archaeologist says that scientists have discovered a skirt that could be 5,900-year-old.
Pavel Avetisian, the head of the Institute of Archeology and Ethnography in Yerevan, said a fragment of skirt made of reed was found during recent digging in the Areni-1 cave in southeastern Armenia. Avetisian told Tuesday’s news conference in the Armenian capital that the find could be one of the world’s oldest piece of reed clothing.
Earlier excavation in the same location has produced what researchers believe is a 5,500-year-old shoe, making it the oldest piece of leather footwear known to researchers.
Boris Gasparian, an Armenian archaeologist who worked jointly with U.S. and Irish scientists at the site, said they also found a mummified goat that could be 5,900-year-old, or more than 1,000 years older than the mummified animals found in Egypt. 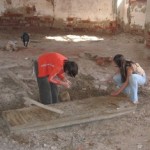