A ministry statement said UAC will repair and upgrade Sukhoi Su-25 aircraft that formed until recently the backbone of Armenia’s small Air Force. It released no financial or other details of the deal.

Su-25, also known by the NATO reporting name Frogfoot, went into service with the Soviet Air Force in the early 1980s and has been repeatedly modernized since then. Russia’s official TASS news agency reported last year that the latest upgraded version of the low-flying warplane will be equipped with new target sighting and precision bombing systems.

The Armenian Air Force has 15 or so such aging jets designed for close air support and ground attack missions. It was significantly reinforced late last year by four Sukhoi Su-30SM fighter jets purchased from Russia.

Su-30SM can perform a much broader range of military tasks with more long-range and precision-guided weapons. It is a modernized version of a heavy fighter jet developed by the Sukhoi company in the late 1980s. The Russian military first commissioned Su-30SM in 2012.

Tonoyan told reporters in January that Armenia will receive more such jets “soon.” He had said earlier that the Armenian military plans to have 12 Su-30SMs in the coming years.

Russia has long been the principal source of military hardware supplied to the Armenian army. Membership in Russian-led Collective Security Treaty Organization (CSTO) allows Armenia to acquire Russian weapons at knockdown prices and even for free. 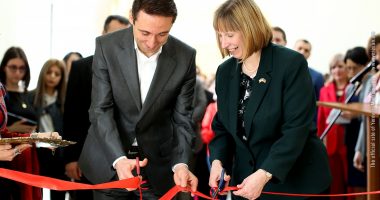