YEREVAN — The American University of Armenia (AUA) hosted an awards ceremony on June 30 for Armenian and Turkish university students who submitted winning essays in a competition titled “A Difficult Dialogue” organized by the Arditi Foundation for Intercultural Dialogue. Students and faculty members from Turkey were invited to Armenia by the Arditi Foundation to take part in the special ceremony and have the opportunity to meet one another. Participating universities were the American University of Armenia, Yerevan State University, Bilgi University, Boðaziçi University, Sabancý University and Þehir University.

The aim of the competition was to gives participants the opportunity to obtain literary quality in their writing by putting themselves in the shoes of each character. This included understanding the essence of the character, even when in personal disagreement with the character’s ideas or values. To many of the participating students, writing their essays was quite challenging due to the strained relationship between Armenians and Turks. Essays revolved around an Armenian and Turkish student who happen to meet at Geneva University in the year 2025. The only criterion put forth by the Arditi Foundation was that participants employ full freedom of imagination in their writing. The development of plots, characters and dialogues were left to the discretion of the writers.

Each participating university from Armenia and Turkey had a 1st, 2nd, and 3rd place winner who were awarded $2,000, $1,000 and $500 respectively. All 1st place winning entries from the participating universities were then submitted for a final round of competition for a $5,000 prize. The result was a tie between AUA student Ani Baghumyan, and Bilgi University student Baki Karakaya. 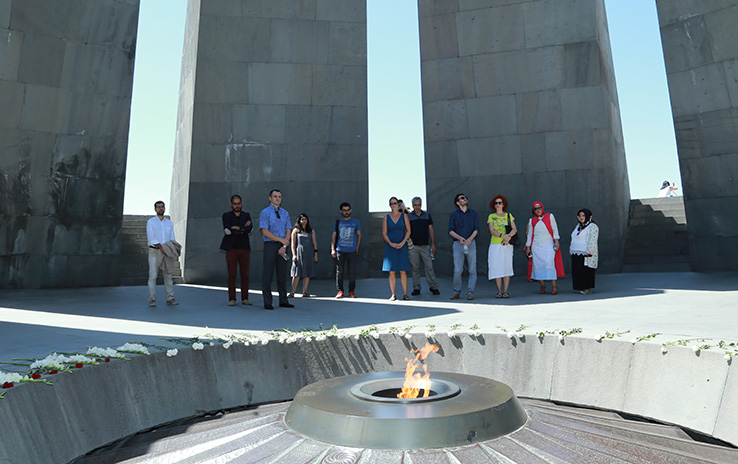 This was the first visit to Armenia for most of the Turkish students and faculty members. Veysel Oztur, an associate professor at Boðaziçi University in Istanbul, stated, “I was excited to hear that we had the opportunity to come to Armenia, personally, I wanted to see what Turkey was like from the other side. I also think it’s important for Turkish students to come here and interact with Armenian students. I know the Armenian culture and heritage has influenced the Turkish culture and heritage greatly, even when it comes down to literature. Events like the Arditi Foundation Essay Writing Competition are one of the best ways to bridge youth together, since they are likely to be the next generation of leaders and peacemakers.” He continued to explain, “As faculty members, we make sure to foster an environment that allows any difficult dialogue.”

AUA Senior Lecturer and Jury Committee Chair Arto Vaun explained how the committee was able to distinguish a particular theme in the top three selected stories. “Although they all had particularly different plots, the common thread was a strong command of language in not just the grammatical sense, but also the imaginative,” states Vaun. According to him, all three stories were doing something very interesting by addressing something very historical, specifically the Genocide, without actually mentioning it. Mr. Vaun elaborated on how challenging such a task may be, “It’s really difficult to write about anything historical without taking away the creative and imaginative and innovative elements of a story. But they exemplified in portraying a very human connection in their characters with different backgrounds. If there was any turmoil or conflict, it was resolved on a very sophisticated and intimate level.”

AUA Visiting Lecturer Vahram Ter-Matevosyan organized a full itinerary for the Turkish students and faculty, which included visits to the Genocide Memorial Complex and the Matenadaran (Scientific Research Institute of Ancient Manuscripts). While in Armenia, guests were also given tours of the Garni Temple and Geghard Monastery just outside of Yerevan.

During the visit to the Genocide Memorial and Museum at Tsitsernakaberd in Yerevan, the group of students and faculty from Turkish universities were exposed to historical details, facts, stories, and emotions about the Armenian Genocide in ways they had not been able to experience before. Boðaziçi University Faculty Member Aylin Vartanyan, an ethnic Armenian born and raised in Istanbul, focuses on teaching students conflict resolution through the literary arts. She stated, “I am thankful for the Arditi Foundation for bringing the 6 Universities from Turkey and Armenia together. And I believe in arts in the aesthetic space, and that space makes the impossible possible, the invisible visible, and the unspeakable speakable. I am proud of all the students who participated in this contest and had the courage in taking this journey of encountering the other in their stories, and bringing a symmetrical dialogue between two people of the future.” 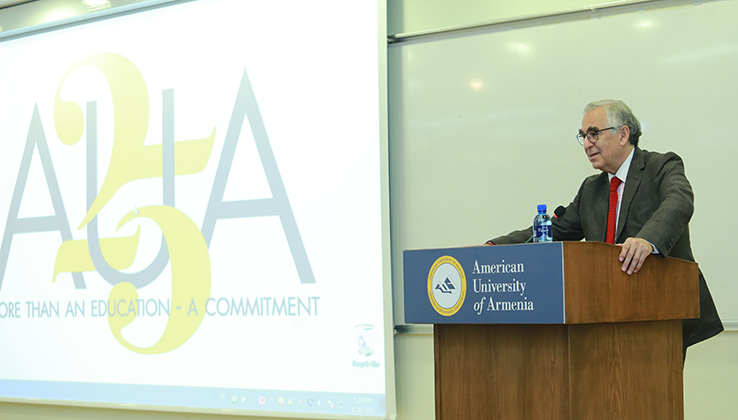 Opening remarks during the awards ceremony were delivered by AUA President Armen Der Kiureghian, Swiss Ambassador to Armenia H.E. Lukas Gasser, and Metin Arditi who established the Arditi Foundation in Switzerland. While addressing students, AUA President Armen Der Kiureghian stated, “As university students you have a special role in fostering dialogue, and understanding friendship between nations. Young people with fresh outlooks on life and free of constraints and obligations, typically are keen on seeking the truth, understanding other points of views, and advocating for justice. Through your higher education and knowledge, you have acquired confidence and wisdom, which will continue to grow as your life experiences will take you through paths of diverse interactions. Through these experiences we hope that you will feel empowered to initiate and pursue openness, dialogue, and discourse with one another with the goal of forging a bright future for the common good. Let this award ceremony be just the beginning.”

Following Ambassador Gassers introductory remarks, Mr. Metin Arditi, commended the visiting Turkish guests, “By coming to Yerevan under very difficult conditions, you demonstrated great courage and a strong determination in having “A Difficult Dialogue” pursued. I want to express my hope, because if a people can confront its present under such difficult conditions with such strong determination, then I think they can certainly confront its past under any hypotheses.” Mr. Arditi hopes to launch a second writing competition in the fall to continue his mission of reconciliation between the two countries through literature. “I was born in Turkey, belonging to a minority group. In Ankara, like in Istanbul, the Jewish and Armenian communities were close. As a Jew, I support the dialogue between Jews and Arabs. As a Turk, born close to the Armenian community, I have the same sentiment of urgency for a true dialogue. And, there is nothing more powerful for this than literature,” he stated.

A similar writing competition was successfully implemented between Israeli and Palestinian students aimed as a cornerstone to bridge peace between youth during times of conflict. When comparing the discourse between Israelis and Palestinians with that of the Armenians and Turks, Metin Arditi reflected, “What emerged was evidence that Armenians are more informed about the problem and possess family memories, as compared to Turkish youth to whom no one had ever spoken to about the subject. The merit of the writings of both groups was great regardless. The subject of communication between Turks and Armenians is 100 times more taboo than that among Jews and Arabs in Israel. The breakthrough reached, thanks to the writing contest, was even more powerful. Although Jews and Arabs argue and fight, this is a form of communication. They live side-by-side and see each other. In the case of Armenia and Turkey, it has been a century where both peoples have not spoken or seen each other, and the border is closed. Speaking of reconciliation can be dangerous in Armenia, because people wish that there will be awareness before long. The representatives of the Turkish universities who came to Yerevan were doubly courageous.”

Metin Arditi was born in Ankara to a Jewish Sephardic family, and left Turkey at the age of seven to study in Switzerland. He currently resides in Geneva, where he is very involved in the cultural and artistic life of the city.

In 1988, he created the Arditi Foundation, which awards fifteen annual prizes to graduates of the University of Geneva and the Swiss Federal Institute of Technology. He is founder of “The Instruments of Peace Foundation”, which offers musical education to Palestinian and Israeli children. Metin Arditi served as a UNESCO Goodwill Ambassador from December of 2012 through June of 2014. He undertook a number of peace and development projects during that time and initiated a series of public conferences at the University of Geneva to raise public awareness on the vital role of culture in peace-building and the need to preserve heritage in times of conflict.

In June 2014, Metin Arditi was designated as a UNESCO Special Envoy for Intercultural Dialogue.

Twenty-five years ago, when AUA was established, an overarching goal was to create an institution that would promote and instill critical thinking, creativity, and freedom of speech. AUA places much importance on working with organizations like The Arditi Foundation that share these values. 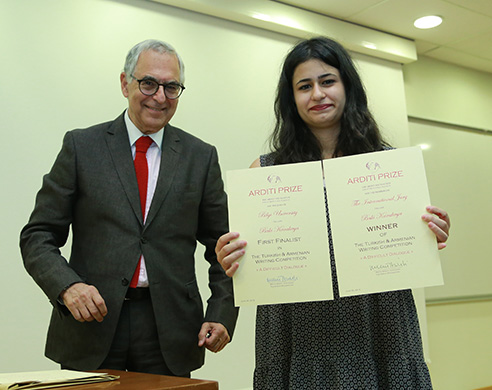 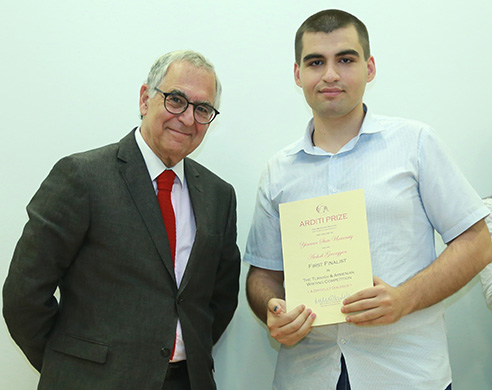 As for the final results of the competition, the top three winning essays from AUA students Ani Baghumyan (1st), Anna Grigoryan (2nd) Donara Sargsyan (3rd) can be found at: http://newsroom.aua.am/event/arditi-essay-competition-final-award-ceremony/. It should be noted that two of the three winners are AUA scholarship recipients. Ani Baghumyan has been a beneficiary of the Roxie and Alice Maseredjian: Chooljian Legacy Scholarship during her 4 years of her study at AUA. Donara Sargsyan is a Turpanjian Foundation Scholarship recipient for the last 2 years.

Securing scholarships for promising students is a priority for AUA and will be a focus of the 25th anniversary Gala being held at the Beverly Wilshire Hotel on November 19. Longtime AUA benefactors Dr. Mihran & Mrs. Elizabeth Agbabian will be among those being honored for their ongoing generosity and commitment to the University. The evening’s keynote speaker will be entrepreneur/philanthropist Ruben Vardanayn. An exclusive clip previewing the upcoming film “The Promise” (directed by Terry George and starring Christian Bale, Oscar Isaac and Charlotte Le Bon) will also be shown. Please contact Lorraine Alexander at [email protected] for sponsorships and tickets.

Founded in 1991, the American University of Armenia (AUA) is a private, independent university located in Yerevan, Armenia and affiliated with the University of California. AUA provides US-style education in Armenia and the region, offering high-quality, graduate and undergraduate studies, encouraging civic engagement, and promoting public service and democratic values. 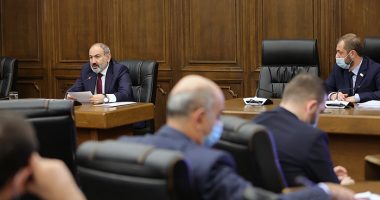 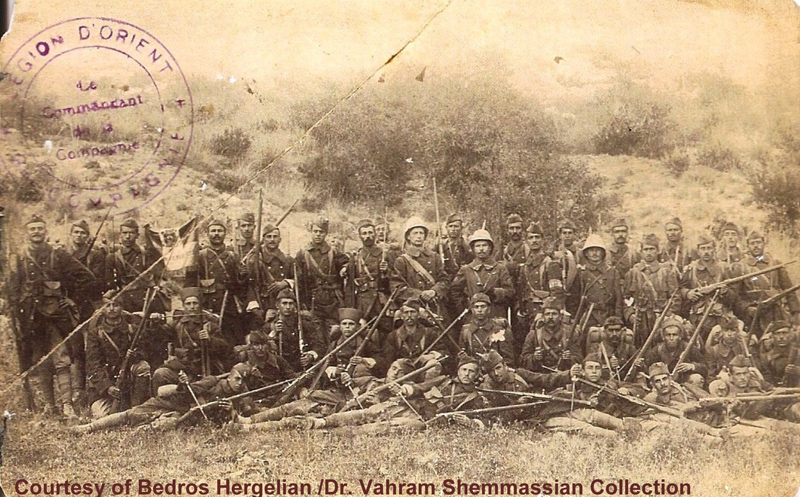