YEREVAN — Vahan Hovannesian, Armenia’s ambassador to Germany, passed away on December 28 at the age of 58 in Berlin after long illness with cancer. Hovannisian was a leading member of the Armenian Revolutionary Federation (Dashnaktsutyun) Bureau.

The Armenian government has set up a special commission tasked with organizing his state funeral. The commission headed by Prime Minister Hovik Abrahamian said on Monday that Hovannisian will be laid to rest on January 3.

President Serzh Sarkisian on Monday offered his condolences to Hovannisian’s family and paid tribute to the Dashnaktsutyun leader, describing him as a statesman, “true intellectual” and “brilliant orator.” “Vahan Hovannisian’s death is a big loss for not only the Armenian Revolutionary Federation but also all of us,” Sarkisian said in a statement.

Vahan Hovannesian was born on August 16, 1956 in Yerevan. He graduated with degrees in history and archaeology from the Moscow Pedagogical Institute in 1978 and received his Pd.D in history.

In 1999, he was elected a member of Armenia’s Parliament, becoming chairman of the Parliamentary Committee on Defense and National Security and Internal Affairs, and served until 2003 in the ARF’s parliamentary caucus. On June 7, 2007 he was elected Vice-President of the National Assembly and on February 28, 2008 he resigned, after the ARF left the governing coalition in objection to the state’s plans to sign the Armenia-Turkey Protocols. On December 28, 2013, Hovannesian was appointed as Armenia’s Ambassador to Germany. 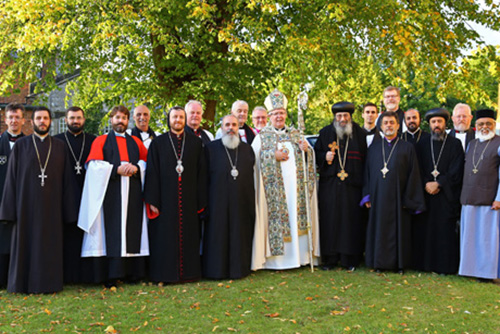 NORTH WALES, UK –This month, a dispute about Christian theology with roots…