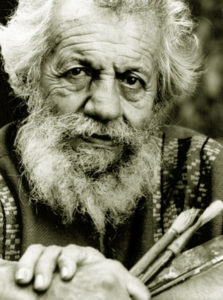 GLENDALE– Kutahya-born, late artist Jirayr Zorthian’s The Divorcement, a controversial art piece that had been confined to a shipping crate since 1955, was finally unveiled to a packed gallery of enthusiastic attendees on July 14, 2017 at Roslin Art Gallery. This historic event continued the following day with a heartfelt panel discussing the stories, legends, artistic significance, and family history behind the piece with daughter Seyburn Zorthian, former Smithsonian associate Paul Karlstrom, artist Patricia Ferber, and moderator Tom Coston of the Light Bringer Project of Pasadena.

The Divorcement was created by Los Angeles-area artist Jirayr Zorthian in 1954 as a response to the difficult divorce procedure he experienced with his wife, Betty Williams, of a prominent New Orleans family. The massive (77″ x 101″), emotionally charged piece expresses his rage aimed towards Betty, depicted as under the control of her monster money-eating mother, with her three children in chains. Although grim in subject, the piece is an explosion of colors, incorporating photographs, text, jewelry, and animal hair. The divorce was a sensation, as it was the first time in California history where a man received alimony from his ex-wife. The painting was so controversial that it was settled that Jirayr was not at liberty to show it while they were alive for the sake of the family.

“If you lived with my father as a wife, he was the center of the world,” said daughter Seyburn Zorthian. “My mother had to circle around and support that. She put up with his incredible temper and abuse for 12 years. My father was furious that she wanted to divorce. It was hard to accept that he had any part to do with this. I think of it as an angry painting but it’s also amazingly beautiful, composed and exciting.” 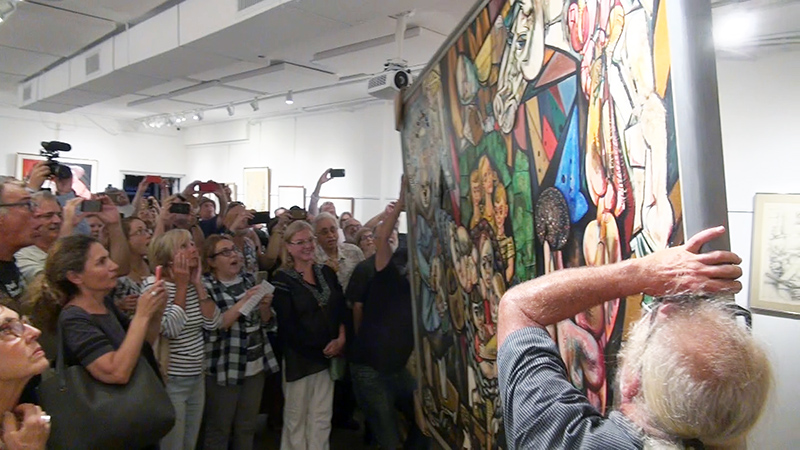 Artist Patricia Ferber, who has known the family since her teens, perceived the painting more as sorrowful. “His father had just died. You lose your parent. You come back and you find that your wife is divorcing you. There is the symbology.” Jirayr has portrayed himself in the painting as a raw, disembodied figure with his brain exposed.

“The main point is that there is no singular truth in that painting,” said Paul Karlstrom, who had written a cover story about Jirayr Zorthian in 2014 in the LA Weekly titled, The Last Bohemian. “My work is to produce material to help documentaries about artists. I’ve seen a lot of them. And this is one of the best I’ve ever seen. But to take it as the truth, is sort of embracing and accepting an idealization or reification of what freedom is.”

Moderator Tom Coston told Seyburn, “If the painting, were it to have gone public, would have greatly humiliated your mother, in Pasadena society, and I can’t image that that would not have been his objective.”

During the early 1950s, Betty Williams had befriended the then budding author of Dianetics, L. Ron Hubbard. In a letter Jirayr had written to his key model, Jennifer Fabos during the 90s, he described his encounter with L. Ron Hubbard, whom Betty had asked to visit the ranch to convince Jirayr not to show the piece. However, according to Fabos, once Hubbard saw the piece, “he stood in front of it for an hour, just staring at the painting. And then, when he finally spoke, after studying it for so long, he turned and told Jirayr that he didn’t need any type of counseling. That he had saved himself thousands of dollars in psychoanalysis. It’s true. If you come up close, you could see all the stuff he put into it telling of his great suffering and agony.” 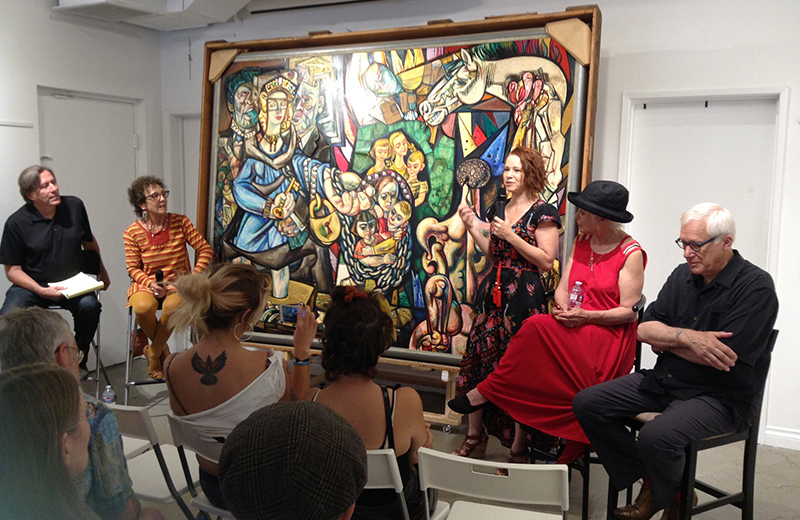 The last time the painting had been exposed was in 1955 at the 15th Annual Society for Contemporary American Art group show along with artists such as Jackson Pollock at The Art Institute of Chicago. The piece was then titled, Sahren, which in Armenian translates to “of the mountain.” After the closing of the show, the piece was returned to Jirayr Zorthian and remained in the shipping crate ever since. The crate still has the original shipping and exhibit tags from 1955.

Director of Roslin Art Gallery, Arno Yeretzian said in his opening statement, “No matter what the reasons are as to why Zorthian couldn’t or didn’t open this crate, the fact that this painting has been sealed up in a crate since 1955, is in itself a fascinating thing and today’s opening is a historic event.” 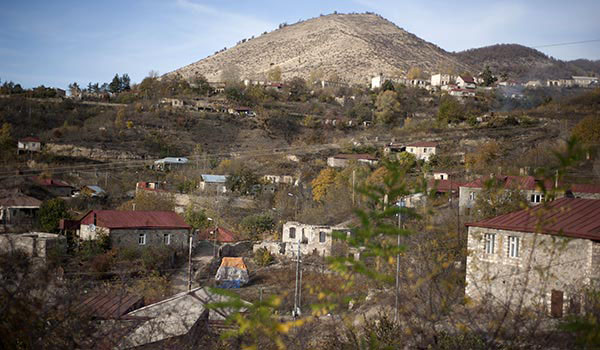 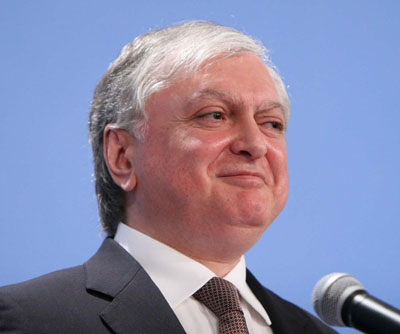